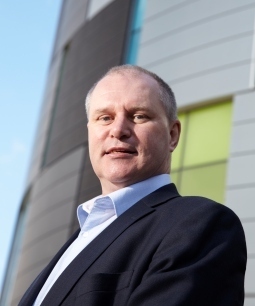 Geoff is an internationally recognised industrial expert in solid state lighting (ssl) technology, especially organic leds. He has a proven track record of delivering both research and  development programmes and public/private fundraising, leading a UK consortium of industry and academia in a £4.3M TSB project on oled lighting, 'Project Topdrawer'.  He has, since 2006, secured over £15M in private and public funding for the development of organic led lighting and concept designs in the UK.

He is a pro-active advocator of ‘smart’ ssl solutions integrated with other emerging technologies, such as printed electronic controls, visible light communications, renewable power generation and low voltage dc grids. Many of which will be demonstrated as a ‘concept’ smart ssl installation in early 2013.

Geoff is a Visiting Professor of Durham University's Energy Institute and the Department of Physics, and an Ambassador for Newcastle Science City. He advises various organisations, including Newcastle City, and the University of Strathclyde’s Smart Lighting Centre on integrated green emerging technologies for intelligent  environments. He is a recognised expert on solid-state-lighting and plastic electronics by the TSB and the EU.

He sits on several influential technology focused bodies: Photonics 21, in Europe on lighting, displays, and controls as well as emerging technologies in solar harvesting. He is vice-Chair of the Plastic Electronics Leadership Group, driving the creation of an exciting indigenous new industry, and the UK’s CPIPE Technology Advisory Board. He is also an industrial board advisor member of a £4.6M EPSRC program, ‘Ultra-parallel Visible Light Communications’, led by the University of Strathclyde.  Other academic partners on this project include the universities of Edinburgh, Cambridge, Oxford and St Andrews.