Man-made earthquake risk reduced if fracking is 895m from faults 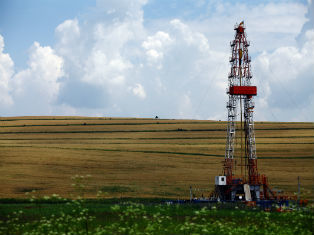 The risk of man-made earthquakes due to fracking is greatly reduced if high-pressure fluid injection used to crack underground rocks is 895m away from faults in the Earth’s crust, according to new research.

The recommendation, from the ReFINE (Researching Fracking) consortium, is based on published microseismic data from 109 fracking operations carried out predominantly in the USA.

Jointly led by Durham and Newcastle Universities, UK, the research looked at reducing the risk of reactivating geological faults by fluid injection in boreholes.

The results indicated there was a one per cent chance that fractures from fracking activity could extend horizontally beyond 895m in shale rocks.

There was also a 32 per cent chance of fractures extending horizontally beyond 433m, which had been previously suggested as a horizontal separation distance between fluid injection points and faults in an earlier study.

The research is published in the journal Geomechanics and Geophysics for Geo-Energy and Geo-Resources.

Fracking – or hydraulic fracturing – is a process in which rocks are deliberately fractured to release oil or gas by injecting highly pressurised fluid into a borehole. This fluid is usually a mixture of water, chemicals and sand.

In 2011 tremors in Blackpool, UK, were caused when injected fluid used in the fracking process reached a previously unknown geological fault at the Preese Hall fracking site.

Fracking is now recommencing onshore in the UK after it was halted because of fracking-induced earthquakes.

Research lead author Miles Wilson, a PhD student in Durham University’s Department of Earth Sciences, said: “Induced earthquakes can sometimes occur if fracking fluids reach geological faults. Induced earthquakes can be a problem and, if they are large enough, could damage buildings and put the public’s safety at risk.

“Furthermore, because some faults allow fluids to flow along them, there are also concerns that if injected fluids reach a geological fault there is an increased risk they could travel upwards and potentially contaminate shallow groundwater resources such as drinking water.

“Our research shows that this risk is greatly reduced if injection points in fracking boreholes are situated at least 895m away from geological faults.”

The latest findings go further than a 2017 ReFINE study which recommended a maximum distance of 433m between horizontal boreholes and geological faults. That research was based upon numerical modelling in which a number of factors, including fluid injection volume and rate, and fracture orientation and depth, were kept constant.

Researchers behind the latest study said that changing these parameters might lead to different horizontal extents of fractures from fluid injection points.

In the latest research the researchers used data from previous fracking operations to measure the distance between the furthest detected microseismic event – a small earthquake caused by hydraulic fracturing of the rock or fault reactivation – and the injection point in the fracking borehole.

From the 109 fracking operations analysed, the researchers found that the horizontal extent reached by hydraulic fractures ranged from 59m to 720m.

There were 12 examples of fracking operations where hydraulic fractures extended beyond the 433m proposed in the 2017 study.

According to the new study, the chance of a hydraulic fracture extending beyond 433m in shale was 32 per cent and beyond 895m was one per cent.

The research also found that fracking operations in shale rock generally had their furthest detected microseismic events at greater distances than those in coal and sandstone rocks.

Microseismic data was used in previous Durham University research from 2012. This suggested a minimum vertical distance of 600m between the depth of fracking and aquifers used for drinking water, which now forms the basis of hydraulic fracturing regulation in the UK’s Infrastructure Act 2015.

Professor Richard Davies, Newcastle University, who leads the ReFINE project, said: “We strongly recommend that for the time being, fracking is not carried out where faults are within 895m of the fracked borehole to avoid the risk of fracking causing earthquakes and that this guideline is adopted world-wide.”

ReFINE is led jointly by Durham and Newcastle Universities and has been funded by the Natural Environment Research Council (UK), Total, Shell, Chevron, GDF Suez, Centrica and Ineos.

Working closely with a global network of leading scientists and institutions, ReFINE focuses on researching the potential environmental risks of hydraulic fracturing for shale gas and oil exploitation.