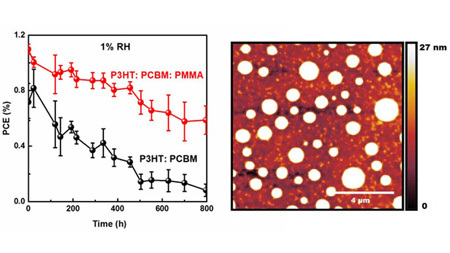 PhD student Zakiya AL-Busaidi, Professor Mike Petty, Dr Chris Groves and Dr Chris Pearson of Durham's School of Engineering have had their research on "Enhanced lifetime of organic photovoltaic diodes utilizing a ternary blend including an insulating polymer" published this week in the Canadian based, global online magazine Renewable Energy Global Innovations. Read the RE Global Innovations summary of the research.

Their paper, which was identified by the magazine as of key scientific interest covers the investigation of the use of an insulating polymer, poly(methyl methacrylate), as a ternary component in poly(3-hexylthiophene):phenyl-C61-butyric acid methyl ester solar cells as a way of enhancing their lifetime and reducing degradation. Their research work is now published in Solar Energy Materials & Solar Cells.

Electrical conductivity did not degrade at different rates across the ternary film. This suggested that water diffused microns through the film before reacting with the active material. The rate of conductivity degradation was similar for binary and ternary devices. This indicated that various degradation mechanism were present, and that poly(methyl methacrylate) only assisted in extending the lifetime associated with a selected degradation pathways.

Power conversion efficiency of the poly(3-hexylthiophene): phenyl-C61-butyric acid methyl ester solar cells is severely limited by reaction with water. The incorporation poly(methyl methacrylate) slows down this degradation process through water absorption. The results of their study suggest that electrically inert and hydroscopic polymers can be blended with an organic photovoltaic active layer to extend the device lifespan.

For further information on the research within this team please contact Dr. Chris Groves https://www.dur.ac.uk/ecs/engineering/staff/teachstaff/?id=7627