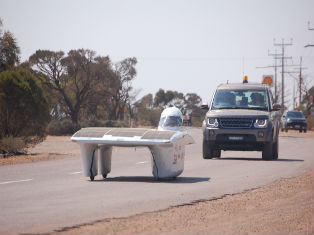 A car designed and built by Durham University students and powered only by the sun is taking to the global stage.

The latest creation of Durham University Electric Motorsport (DUEM), the car is made of carbon fibre, weighs only 200kg and includes 391 solar cells allowing it to generate enough power to hit a top speed of 70mph.

It will be exhibited at COP22’s Sustainability and Innovation Forum on 14 and 15 November, providing world leaders and media with the opportunity to explore the technology behind the UK’s longest-running solar car project.

COP22 could be an important step towards implementation of the landmark Paris Agreement on Climate Change, agreed by world leaders last year.

Tobias McBride, Head of DUEM’s Business Team, at Durham University, UK, said: “This is a huge opportunity for us to showcase British, sustainable engineering on the world stage.

“If we are going to successfully tackle climate change, then we are going to have to think in a more creative and sustainable way about how we source our energy and power our transport.

“Exhibiting at a truly global event allows us to showcase the technology our students have developed, educate the public about climate change and inspire the next generation.”

Before arriving at COP22, the solar car will be exhibited alongside the future of motorsport at the Formula E-Prix event in Marrakech on 11 and 12 November.

The solar car project was established at Durham University in 2002 and the car has been raced around the world including the 2008 North American Solar Challenge and the 2011 and 2015 World Solar Challenge in Australia.

Earlier this year DUSC was exhibited at the London Motor Show & Goodwood Festival of Speed.

Dr David Sims-Williams, DUEM’s Faculty Advisor, in the School of Engineering and Computing Sciences, said: “It is great to see our students putting what they have learned into practice to tackle the key challenge of transport energy. The Durham University Solar Car points the way to the development of high-efficiency vehicles, whatever their power source.
“The solar car project brings together Durham’s commitments to world-changing research, education which enriches society and opportunities for unrivalled student experience. We are really proud of the leadership and teamwork demonstrated by our students in pursuing this endeavour.”

DUEM is funded through sponsorship and private donations. Please see here for more information about becoming a sponsor or making a donation.