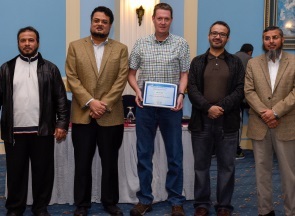 Dr John Hall, Environmental Specialist at Saudi Aramco, received a commendation and prize for the success of the Durham University and Saudi Aramco project “Developing Environmentally Friendly Drilling Fluid Additives”, which has resulted in a number of patents. The project was led by Professors Chris Greenwell and Andy Whiting at Durham.

The Departments of Earth Sciences and Chemistry at Durham University have been working with Saudi Aramco to develop novel drilling fluid additives which give leading performance as well as environmentally friendly properties. Increasingly, oil and gas exploration is occurring in pristine environments and looking to target reservoirs in very deep formations. Such conditions require exceptionally high performance drilling fluids, able to operate under very high temperature and pressure conditions. The project is led by Professors Chris Greenwell and Andy Whiting.

As the 2 year project draws to a close, a number of patents are in preparation and filing. As a result, the project has been highly rated within Saudi Aramco, with Dr John Hall, an environmental specialist, receiving a commendation and award for the success of the project.