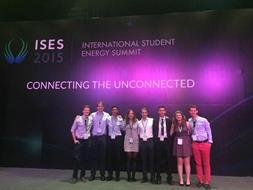 The DEI was offered the opportunity by Student Energy to nominate four students for bursaries to attend this year’s ISES 2015 Summit in Bali, however after significant levels of interest were shown by our undergraduate students, DEI were able to secure four more bursaries. “The ISES was by far the most rewarding experience I have had to date”, said one student (Georgina Box). Another said “It is by far the best thing I have ever done in my life”, (Henry Salisbury). DEI are hopeful that this opportunity will be available for future ISES events.

All the students reported back that they had had an amazing experience. One of the Durham Cohort, Nicholas Ogilvie, even won the accolade of top ten Tweeter for the event. The experience has inspired the students to set up a new Durham Student Energy Society, and last week met with Jacki Bell and Lynn Gibson of the DEI to ascertain how they can link into the DEI. Watch this space for more information!

ISES is a global forum that focuses on sustainable resource management and the role that students will play in defining the future of energy development. ISES is Student Energy’s pinnacle event and targets international, multidisciplinary post-secondary students in undergraduate and graduate studies interested in energy. The ISES program focuses on three main pillars that address today's key energy issues:

ISES occurs every two years at academic institutions around the world. The internationally recognised event has brought high profile energy leaders such as Connie Hedegaard (EU Commissioner for Climate Action) and Dr Rajendra Pachauri (Nobel Laureate and Chair of the IPCC). The latest summit brought together over 500 students from 60 countries.

DEI ran a competition asking undergraduate and postgraduate students who were interested in attending the Summit to provide DEI with a short statement detailing why they are interested and why they deserve the scholarship. The call was well received, and after confirmation from ISES that they could double our quota, eight undergraduate students in total were shortlisted to attend the Summit on 10-13 June 2015. They were:

From the Department of Earth Sciences - Devon Platt, David Redpath, Henry Salisbury, and Christopher Lowans who attended are all 2nd year undergraduates.

“The International Student Energy Summit was by far the most rewarding experience I have had to date. The opportunity to listen to and question experts, such as Ms Noeleen Heyzer, Former Under-Secretary-general of the United Nations and Mr Maumoon Abdul Gayoom Former President of the Maldives, on world energy issues and network with outstanding students from 100 different countries was a deeply humbling and uniquely informative experience.

Hosted in Bali, Indonesia the theme of the 2015 summit was ‘Connecting the Unconnected’ which focused on the possibilities and restraints of developing countries continuing to make economic progress in a sustainable way in order to prevent further acceleration of climate change. One panel that was particularly memorable was the ‘Energy and Women Empowerment’ session which featured three female entrepreneurs who shared their stories of the obstacles and cultural barriers they had to overcome as a woman in order to succeed in male dominated sectors in their home countries of Indonesia, South Africa and Nigeria.

The words of all of the panellists really made me stop and think about the future of world energy and I am more determined than ever to pursue a career in the energy sector to address the global issues we are facing.

I would like to thank the Durham Energy Institute for giving me the opportunity to meet some of the most esteemed individuals in the field of energy and for allowing me to represent Durham at my first international summit, which I hope will be the first of many. All of the delegates from Durham University have taken so much from the summit we would like to set up our own Student Energy Chapter at Durham to further spread the word of what we have learnt.”