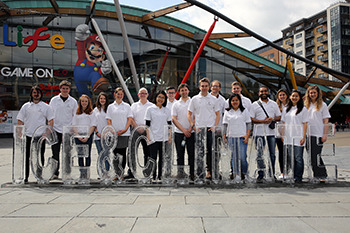 DEI Advoiroy Board member Ignacio Marti (Innovation and Research Director at the Offshore Renewable Energy Catapult) took part in a climate change panel debate at the Life Centre Newcastle. The event was organised by Masters students from Durham’s Department of Geography and Risk Masters who brought together three leading North East universities to communicate climate change in an unconventional way.

Building on the success of an outdoor climate cinema and debate last summer in Durham market square, the organisers David Saddington and Christopher Vos, with the help of Professor Chris Stokes, brought the event to the Life Centre, Newcastle, on Saturday May 23rd, 2015.

David and Christopher led a team of fellow masters students to put on the event and also gained support from staff and students from Newcastle University and Northumbria University.

David commented that, "Communicating climate research to the public has never been more important yet public interest in climate change is at an all time low".

"A lot of the UK public perceive climate change as a complex scientific issue that has no real relevance to their everyday lives. This ‘Ice & Climate’ event addresses these misconceptions by making climate change an interesting and accessible subject. The event also seeks to make people aware that climate change isn't simply a distant scientific concept but it will have very real implications on the everyday lives, finances, health and security of people even here in the North East of England".

The event transformed an outdoor square into a cinema to showcase bold and provocative climate change films to the public. The outdoor cinema area was also garnered with glistening ice sculptures which dramatically collapsed throughout the day.

In addition to the outdoor cinema, visitors to the Life Centre were presented with the opportunity to 'Meet the Scientists' at various interactive exhibitions which explained the basics of climate change, how glacier melt contributes to sea level rise, what is it like doing fieldwork in extreme environments, and how marine cores can help us understand past climate.

The 'Meet the Scientists' stalls were a great success in attracting the public to climate science and special thanks goes to Professor Glenn McGregor, Research Masters students and Geography Integrated Masters students who curated the stalls.

The day of climate change learning culminated in an evening debate in the Life Centre Theatre in which tackling contemporary climate issues were discussed and debated.

Communicating climate change, divestment, the UK's energy future and the expectations for the Paris Climate conference this year were all featured in the one hour Question Time-style event.

On divestment, economist and researcher Alice Lépissier said, "Investors, especially those with long-term investment horizons such as pension funds, are increasingly worried about the risk of a carbon bubble. So some investors are worried about holding these potentially “stranded assets". Divestment in this context makes good business sense in order to reduce exposure to assets which could essentially be worthless".

The messages from the event gained substantial publicity in regional press and on social media with Natalie Bennett, the leader of the Green Party, tweeting about the event.