Teesdale could feel the heat of geothermal energy plans 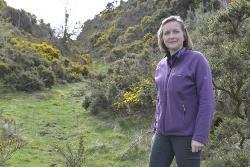 Dr Charlotte Adams at the Cleveland Dyke, near Copley

Dr Charlotte Adams BritGeothermal speaks to the Teesdale Mercury about the potential to heat thousands of homes across the North East by tapping into deep sources of hot water along the Butterknowle Fault.

A FAULT line that cuts through Teesdale may have the potential to heat thousands of homes across the North East.

Geologists are investigating the viability of tapping into deep sources of hot water along the Butterknowle Fault to provide heating to homes along the fault line. The fault stretches more than 50 miles from Lunedale to Hartlepool.

The research is being spearheaded by geologist Dr Charlotte Adams of BritGeothermal, a research collaboration between the British Geological Survey and Durham, Glasgow and Newcastle universities.

Dr Adams, who lives in Woodland, said: “We are researching the geothermal potential of the North Pennines and this includes looking at whether the Butterknowle Fault is acting as a plumbing system, taking warm geothermal fluids from the North Pennines though our area right out to the coast at Hartlepool.

“This means some of the larger centres of population along the fault, for example Spennymoor and Bishop Auckland, could access geothermal energy in future.”
This would require wells to depths of about two kilometres. However, it would be an expensive process ­– even a basic research well costs about £500,000 per kilometre.

But Dr Adams said some of the estimated 2,000 onshore wells abandoned by the petroleum industry could also be re-used for geothermal heat production.

Geothermal energy has largely been overshadowed by the debate about fracking – a process used to extract shale gas.

But Dr Adams said: “Shale gas is not a game changer for the UK’s future energy supply. It will only provide gas supplies for three to seven years, whereas a geothermal well can produce energy for several decades. Our interest in the shale gas industry is the wells that might remain that we can colonise for geothermal heat.”
Southampton has the only heat network in the UK tapping into geothermal energy, but Auckland Castle is looking to access hot water in the Butterknowle Fault to provide heating to the castle as well as some of the town.

Temperatures at a depth of two kilometres are believed to be around 60-70C.
A one kilometre deep research well drilled near Eastgate, in Weardale, has yielded good flows of water with a temperature of 46C. Dr Adams said a deeper well could yield water approaching 70C. Although it is not quite hot enough to generate electricity, this is ample to provide heating to homes and industry, she said.
Funding from the Department of Energy and Climate Change has been made available to look at how more heat networks can be established in the UK.

Dr Adams added: “We know relatively little about our deep geology yet it could provide an important source of energy in future. We need to do more research on how best to identify potential geothermal energy resources alongside a consideration of the energy demand from homes and businesses needed to make it viable.”

Read the article at : http://www.teesdalemercury.co.uk/Articles/teesdale-could-feel-the-heat-of-geothermal-energy-plans#sthash.HcLsxm8E.dpuf