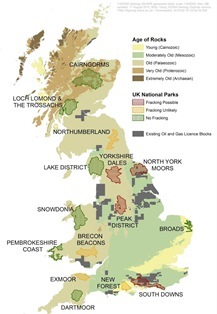 Most of Britain’s national parks are unsuitable for fracking due to their geology, according to a new briefing from Durham Energy Institute.

After reviewing existing geological data, scientists at Durham’s Department of Earth Sciences highlighted the potential suitability of each of the country’s 15 national parks for fracking activity according to their rock type.

The review has been published as a policy briefing document by the Durham Energy Institute (DEI).

The briefing categorises the suitable geology for fracking in the UK’s national parks as:

The briefing also contains a map of the UK showing the geology of Britain’s national parks in relation to their suitability for fracking.

Author Dr Liam Herringshaw, of Durham’s Department of Earth Sciences, said the briefing had been prompted by confusion around Government policy in relation to fracking in national parks.

In January, in response to public concerns, the Government announced there would be “an outright ban on fracking in national parks”, only to amend this in February to say that “in the case of areas of outstanding natural beauty and national parks, given their size and dispersion, it might not be practical to guarantee that fracking will not take place under them”.

The Infrastructure Act 2015 was enacted in February, restricting unconventional oil and gas development in national parks.

However, Dr Herringshaw said the Act’s implications were presently unclear as protected areas are still to be defined, though the Government is required by law to clarify protected areas in legislation by July this year.

Additionally, recent planning guidance by the Department of Communities and Local Government states that applications for oil and gas exploration in national parks should be refused “other than in exceptional circumstances and where it is in the public interest”.

In March, Celtique Energie cited this uncertainty as a factor in its decision not to lodge an appeal against the refusal of planning permission by the South Downs National Park Authority (SDNPA) for the drilling of a single exploration well.

Last week in its “green manifesto” Labour vowed that shale gas exploration will not take place in National Parks and protected areas if it wins the General Election.

“We hope that this review of existing information about the geology of the UK’s national parks will help provide all sides involved in the fracking debate with some clarity about the potential for fracking in these areas, which currently appears to be lacking.”