Shaping the future of aviation 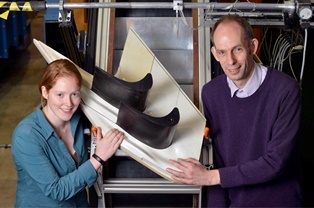 More than 1,000 aircraft carrying passengers all over the world have more efficient engines, saving fuel and causing less pollution, as a result of turbine technology developed at Durham University.

The University’s partnership with Rolls-Royce, whose engines are fitted to planes including the world’s largest airliner, the Airbus 380, is just one example of the benefits of the university’s research that is being measured for the first time in a Government-backed exercise.

More efficient gas, steam and wind turbines have also resulted from research by Durham University, which works in partnership with industry and other centres, such as the Offshore Renewable Energy Catapult, formerly the National Renewable Energy Centre (NAREC), based at Blyth in North East England.

Rolls-Royce adopted a new shape for the turbine endwall – the inner edge of the blade, where it attaches to the spinning central rotor - for its Trent engines, which are fitted to more than 1,000 aircraft.

It is estimated that an aircraft flying from Zurich to Singapore saves 1,750 litres of fuel if its engines have these ‘profiled endwalls’. Dr Grant Ingram, who led the research project at Durham University, said that more efficient jet engines not only reduce costs but help to protect the environment through lower emissions.

The turbine endwall project is one of 89 ‘impact case studies’ – examples of how research has benefited society – submitted by Durham University as part of its entry to the Research Excellence Framework (REF), a national exercise to assess the quality of research in UK universities whose results were published on 18 December 2014.

Ongoing work in the engineering labs at Durham University is focused on:

Professor Simon Hogg, Director of Durham Energy Institute (DEI) and a specialist in turbomachinery, said: “The design of turbines, from the shape of the blades to the efficiency and reliability of their gearboxes, generators and bearing systems, are all important for reducing cost and increasing reliability of power generation.

“The key issue for wind power is the high cost of generating electricity compared to burning fossil fuels, so there is a big focus on research to reduce the cost of energy from wind turbines by making them more efficient and by improving their reliability, said Professor Hogg, who is DONG Chair in Renewable Energy at the University - a position funded by Danish Oil and Natural Gas (DONG), one of the major developers of wind farms in the UK.

Pictured are Professor Simon Hogg and Alison Auld pictured, with a model of turbine blades. In the background is the cascade wind tunnel where blades are tested in the School of Engineering and Computing Sciences at Durham University.
More news items