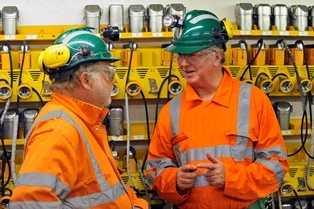 Energy Minister Michael Fallon has visited an innovative Durham Energy Institute project aimed at cutting the cost of fighting climate change and radically reducing carbon emissions. The Durham and Sheffield universities-led Muon Tomography project, based at Boulby Underground Laboratory, at Boulby Mine on Teesside, is developing devices which use subatomic particles known as muons to monitor the stored CO2.

Carbon Capture and Storage (CCS) is a process of capturing millions of tonnes of carbon dioxide (CO2) from power stations and industrial facilities, and storing the CO2 offshore, deep under the sea bed.

The Durham and Sheffield universities-led Muon Tomography project, based at Boulby Underground Laboratory, at Boulby Mine on Teesside, is developing devices which use subatomic particles known as muons to monitor the stored CO2.  Other partners in the project are the University of Bath and the Rutherford Appleton Laboratory, while additional expert input has been received from colleagues at NASA.

The £1.75million project involves housing the prototype CO2 detectors in the lab at Boulby Mine to simulate offshore underground sites that may be used to store captured CO2 in the future. At a depth of over a kilometre, Boulby, a working potash and salt mine operated by Cleveland Potash Ltd, is the deepest in Britain.

The muons, which make up much of the cosmic radiation reaching the earth's surface, pass through solid objects and could therefore be used to monitor CO2 stored under the sea bed to make sure it is remaining stable.

Professor Jon Gluyas, of Durham Energy Institute, one of Durham University’s nine research institutes, said: “The muons begin life in the upper atmosphere, the result of collisions between cosmic rays generated in supernova hundreds of light years from Earth, and nitrogen or oxygen atoms. They penetrate through almost all surfaces and substances, much more powerfully than X-Rays and can be used to make three dimensional images of objects.

“This imaging – known as tomography – could be used to monitor CO2 held underground, or ‘geo-stored’.

“CCS is a possible solution to preventing the emission of CO2 into the atmosphere by capturing it and compressing it into a fluid. This could then be stored underground, such as in the depleted oil and gas fields under the North Sea’s bed. The process could reduce emissions from fossil fuel power stations by up to 90 per cent.

“Muon tomography could enable us to remotely check and track the geo-stored CO2 and so ensure the integrity of the site.

“We are delighted with the £647,000 contribution to this project by the Department of Energy and Climate Change (DECC) and thrilled to have the opportunity to show the Minister the project in action.”

“The UK is ideally suited to the development of a CCS industry with excellent storage potential in the North and Irish seas as well as world leading CCS research like this being undertaken by UK universities. We want to see a strong and successful CCS industry which has the potential to support a diverse energy mix and help us to achieve our climate change targets in a cost-effective way.”

Phil Baines, the Managing Director of the company operating Boulby Mine said: "We are proud to be enabling the progression of nationally and internationally important scientific research in the region. This project and the wide range of projects hosted by the government-funded Boulby Underground Laboratory show that science and industry can work hand-in-hand to the benefit of all."

The project is building on the work of the Muon Tide study at the same location. This uses muons to measure tidal movements from three quarters of a kilometre below the sea bed, as the mine extends six kilometres out from the shore, beneath the North Sea.

Prof Gluyas added: “The tidal changes give off minuscule signals when compared with what we would expect from active CO2, so it becomes a good test of the sensitivity of the Muon Tomography project.