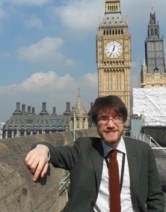 At the recent Dalton 2014 Royal Society meeting, Chemistry PhD student, Jack Rowbotham won awards for his bio-energy poster and will be representing the UK in a meeting Brazil in August.

The Dalton 2014 event, held in Warwick in April, is a national event that brings together four of the main inorganic chemistry discussion groups of the Royal Society of Chemistry's Dalton Division. Jack Rowbotham won, not only one of two poster prizes awarded by the RSC journal Chemical Sciences, but also the award for the best overall poster at the meeting! Jack’s winning poster entitled “Opening the Egg-box: Solution-state Studies of s-Block Metals with Seaweed Sugars” can be seen downloaded here.

Jack’s prize is to represent the UK at the forthcoming XVII Brazillian Meeting on Inorganic Chemistry (BMIC; http://bmic2014.ufmg.br) in Araxa, Brazil, in August of this year.

Jack Rowbotham has recently returned to Durham following a 3-month RSC Westminster Fellowship, during which Jack worked for the Parliamentary Office of Science and Technology (POST), spending his time advising the Energy and Climate Change Select Committee.A broad overview of these types of fellowship and some of what Jack did in Westminster have appeared in the March issue of RSC News pages 10-11 in http://www.rsc.org/images/March%202014_tcm18-238611.pdf

Currently, Jack is part way through the 3rd year of his PhD student with Dr Phil Dyer and Dr Chris Greenwell.