DEI and Propsect Fracking event at the Royal Society 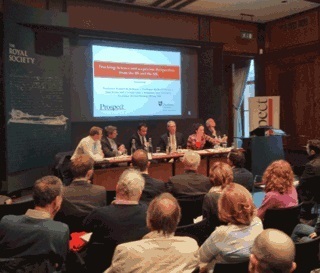 On 9 April 2013 DEI and Prospect Magazine co-hosted a public event at the Royal Society on “Fracking: science and scepticism. Perspectives from the US and the UK".

On 9 April 2013 DEI and Prospect Magazine co-hosted a public event on “Fracking: science and scepticism. Perspectives from the US and the UK” at the Royal Society”.

The panel of high-profile speakers, included:

The event was chaired by Professor Richard Davies of the Durham Energy Institute, and attracted an audience from across the scientific, geological, energy and media communities.

The event was organised to help improve the quality of the debate about this topic now that the UK government has given the green light to start exploratory hydraulic fracturing for shale gas in the UK.

Fracking has become an emotive issue in the UK. Public concern about hydraulic fracturing and its effect on our energy, environment and geological processes often plays out in a highly contentious way. How much impact does the science behind the process of shale gas extraction have on the public and media debates? How much of what has been reported in the media follows experiences from the United States?

It was a spirited event, with a wide range of views represented—both on the panel and in the audience. The discussion also addressed the implications of the UK government approval of the start of exploratory hydraulic fracturing for shale gas in the UK. Professor Jackson said that there was “a lot of potential for shale gas that has already been recognised in the United States.”

Byles acknowledged that views on the subject are “very polarised,” with some arguing that shale gas is an “unmitigated disaster” and others saying that it will mean “no more energy security problems and that the price of gas will come down.” The truth, he said, “is going to be somewhere in the middle.”

For a commentary on the event go to http://www.prospectmagazine.co.uk/blog/fracking-science-and-scepticism/