How do US communities assess the risks of Fracking? 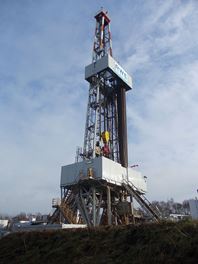 On 12th March 2014 DEI and IHRR co-hosted a visit from Professor Susan Christopherson of Cornell University, USA. Susan is a professor in the Department of City and Regional Planning whose research focus is on political-economic policy.

Susan’s talk entitled “A Distinctive US Approach to Shale Gas Development? Local Responses to Complex Risks” examined how communities react to and prioritise perceived risks from hydraulic fracturing operations. The talk, organised and hosted by Durham Energy Institute, Department of Earth Sciences and the Institute of Hazard, Risk and Resilience was attended by close to 50 staff and students.

Shale gas exploitation has revolutionised the US energy market over the last decade, with the country as a whole experiencing lower gas prices and increased energy independence, while some gas-rich regions have seen booms in their economy with reduced unemployment and large financial rewards for landowners and certain local businesses.

However, many local residents have opposed such developments and are concerned regarding issues such as safety, industry regulation, and disruption to their way of life. With shale gas exploitation becoming ever more likely in the UK, it is important to learn from the US experience to understand how communities react to the industry, and how best to regulate the industry to alleviate public concern and to mitigate any impacts of the shale gas industry.

A key finding of Susan’s research, which largely focused on the shale-rich state of Pennsylvania, is that US communities are not only concerned over the much publicised potential environmental risks associated with fracking, but also the long-term social and economic effects of large-scale shale gas exploitation. The talk highlighted economic and social risks such as;

Many concerns of local people focus on how the peripheral costs of shale exploitation in an area will be met by the community. For example, fracking in an area puts increased strain on local traffic infrastructure; many communities are concerned that residents will incur the costs of maintenance and upkeep.

The talk concluded with a discussion of interviews conducted with members of the public in affected regions. A key issue highlighted from these interviews was the desire for greater local government regulation of the shale gas industry due to distrust of state or industry regulation. Applying this to the UK situation, it will be vital to ensure that local communities feel that they are adequately compensated for any perceived costs incurred by a growing shale gas industry, and that trust is built through community consultations and openness on the part of industry and regulators. 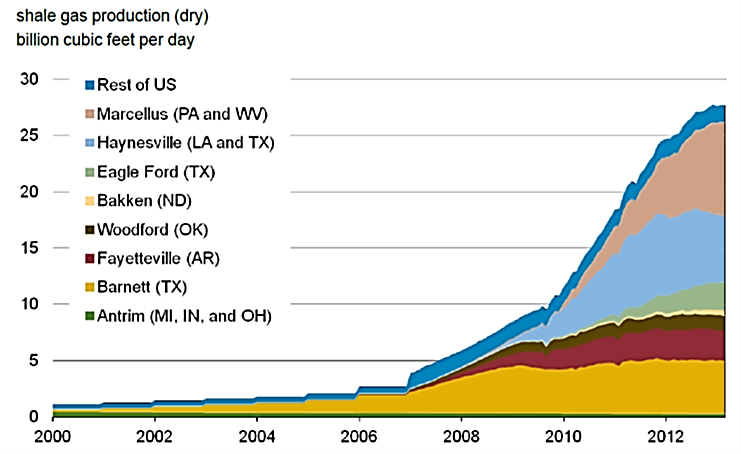 Production of natural gas from shale in the United States has expanded rapidly in the last ten years, and is projected to continue through 2040 (EIA 2013a)