Ian Marchant: Reflections on 25 years in the Energy Industry 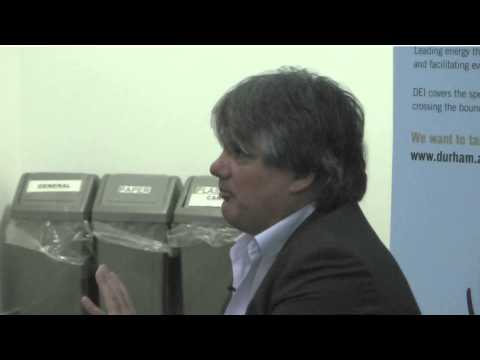 Reflections on 25 years in the energy industry with Ian Marchant

Durham Alumni, Ian Marchant, spoke on Thursday 6 February at the Durham Energy Institute on his vision of a UK Energy Future. His talk addressed some of the key energy problems we are currently facing including high domestic energy bills, a growing lack of trust in the energy industry and the decision on what mix of energy sources we should be investing in for the future. His talk provoked many questions and interesting discussion from the mixed audience of students, academics, and representatives from the energy industry and third sector.

Watch the video of the event here!

The energy dilemma is increasingly dominating the public imagination. With electricity prices now higher than ever before, a debate rages about whether people are paying too much to the big energy companies. The public is increasingly plagued with worries over constantly rising household energy bills, the possible threat of national blackouts in the near future, as well as concerns about the environmental and social impacts of introducing energy technologies such as wind turbines or shale fracturing into our communities. The big questions in energy affect everyone of us in our daily lives.

In his lecture Ian Marchant argued that the UK energy market is in need of a fundamental review. Currently the energy market is being intervened in and regulated too much with failed results. Ian criticised both the current Government’s Electricity Market reform and Labour’s plans to freeze electricity prices as misjudged and ineffective interference.

It is time for a high-level grown up debate and decision on whether we want market or regulation. If we are to avoid a real energy crisis we must choose either a fully and independently regulated energy sector one driven by market forces.

On the question of what should be our future energy mix Ian reviewed the implications of different energy sources for household bills and carbon emissions. He concluded that we need a mix of energy sources to enable us to keep bills at similar levels to the amount paid today but would carbon emissions to only 0.5 tonnes pa. Ian’s ideal mix would be:

However he emphasised that investment is also needed into research and development of carbon capture and storage.

Ian finished by arguing that a sustained campaign to rebuild public trust in the Energy sector is essential. Energy is now one of the most distrusted of all consumer industry sectors. However Energy really matters and is fundamental to our modern way of life. Economic prosperity is linked to energy prices, the Energy Industry is an important employer across the UK and how we produce energy directly affects the environment. Ian’s talk provoked plenty of questions and interesting discussion from the audience.

Speaking in the Northern Echo leader article (4 February 2014) Ian said “I have been fortunate to work in the energy industry for 25 years and continue to be involved in many aspects of it. Our modern life is almost completely dependent on reliable and affordable energy and as result rarely a day goes by without the industry making headlines. It is an interesting and challenging sector. Returning to Durham to share some of my thoughts is like a homecoming, I was an undergraduate there, completing a degree in economics, and also met my wife at Durham so it has a place in my heart.”

Ian Marchant was recently appointed as a Visiting Professor at Durham University’s Business School and will be working with DEI to engage the public and students in energy issues.

Ian Marchant was appointed as chairman of the John Wood Group at the end of January. He has formerly been has been a director of Wood Group since 2006 and senior independent non-executive director since May 2012. The Wood Group is an international energy services company helping oil and gas firms run their operations in the North Sea and around the world and operates in 50 countries.

Ian was Chief Executive of SSE, one of the UK's leading utility companies and Scotland's largest industrial company for over ten years until he stepped down in the summer of 2013. He is now Chairman of the renewable energy company Infinis Energy plc, and is a Non-Executive Director of Aggreko plc who provide standby generation to global customers. He is also Chairman of Scotland's 2020 climate delivery group, President of the UK's Energy Institute and vice chair of the Maggie’s Cancer Charity. He is also involved with some small Scottish businesses in the energy industry.

A long time ago he qualified as an accountant after graduating from Durham with an Economics degree.