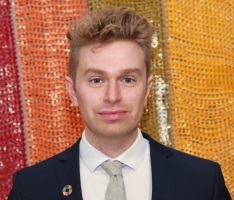 DEI Public Lecture: Has 2019 been a turning point in tackling the climate crisis?

Temperatures continue to rise, extreme weather events are being becoming more frequent and the full scale of the climate crisis is becoming clearer to see. Despite amplified impacts 2019 has already been a remarkable year of action - millions have joined global climate protests, climate emergencies have been declared and net-zero has become enshrined in UK law. Something seems to be happening, but is it too little too late?

In this public lecture David looks back at the major climate milestones of the year so far, before having a conversation about the future of UK climate action and energy transition. David talks from his experience as a climate change communicator, international consultant and now as a civil servant.

David Saddington is a climate change policy maker & environmentalist. Since experiencing extreme flooding as a teenager he has communicated the importance of climate change action to millions, pioneered innovative policy change and worked with business on bold sustainability strategies. David’s first intervention was heading up a high profile public awareness campaign featuring BBC, Sky, ITV and working with then UK Prime Minister, Tony Blair, to get climate change on the school curriculum. David has spread climate education to other countries and his work to re-energise communication of climate change to the public has been featured by United Nations as an example of best practice. After leading education reforms David has pursued his own academic work first studying climate science before going on to investigate the economic, security & health risks of climate change at Durham University.

David has shared the stage with heads of state and CEO’s, talked at venues from the Hong Kong Science Museum to a beach festival in Ibiza and his TEDxTeen talk ‘Why I Don’t Care about Climate Change’ is one of the most watched climate talks on Youtube. David speaks about the opportunities and challenges from tackling climate change from his international consulting experience implementing carbon policies under the Paris Agreement and on sustainability initiatives with multinational corporations.

David now works as a Senior Executive Officer at the UK Department for Business, Energy & Industrial Strategy to design the future of carbon pricing policy after Brexit. David has been named by WWF as an Earth Hour Hero for his now 15 years of continued work as an environmental change maker and he is an associate fellow of the Durham Energy Institute and a fellow of the Royal Geographical Society. David is also on the UK Board of Trustees for Nile Rodgers' 'We Are Family Foundation' which supports game-changing young entrepreneurs working to meet the Sustainable Development Goals.