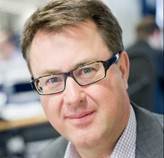 Andrew Wright is an independent energy consultant and former Senior Partner in Energy Systems at Ofgem, the gas and electricity regulator for Great Britain. He is a member of the Gas and Electricity Markets Authority, Ofgem’s governing body.

He worked at Ofgem from 2008 to 2018, including a nine-month period as interim Chief Executive, five years leading the Markets Division and his most recent post as Group Finance Director .

Andrew, a Durham graduate, has 30 years of experience of the gas and electricity sector. Before joining Ofgem he was a senior equity research analyst covering UK and European utilities for a number of major investment banks, including, most recently, UBS.

Andrew worked in the electricity industry during its privatisation, spending six years with Manweb, the regional electricity company, in a variety of management and strategic roles.

After graduating in Physics from Durham, Andrew went to Cranfield University, where he wrote his PhD thesis on the statistical modelling of soil erosion. He then worked as post-doctoral research associate in the Energy Research Group at Cambridge University and, later, as an energy sector consultant. More recently Andrew was made a Professor in Practice at Durham University.