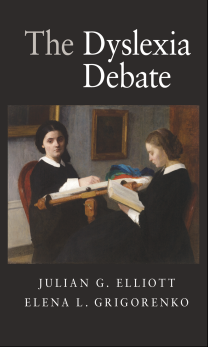 The Dyslexia Debate examines how we use the term “dyslexia” and questions its efficacy as a diagnosis. While many believe that a diagnosis of dyslexia will shed light on a reader's struggles and help identify the best form of intervention, Julian G. Elliott and Elena L. Grigorenko show that it adds little value. In fact, our problematic interpretation of the term could prove to be a major disservice to many children with difficulties learning to read. This book outlines in detail the diverse ways in which reading problems have been conceptualized and operationalized. Elliott and Grigorenko consider the latest research in cognitive science, genetics, and neuroscience, and the limitations of these fields in terms of professional action. They then provide a more helpful, scientifically rigorous way to describe the various types of reading difficulties and discuss empirically supported forms of intervention.

2. Explanations at the cognitive level

3. The neurobiological bases of reading disability

“Every decade or two, a book will emerge that is able to synthesize the past and present research on dyslexia in such a way that the future of where we need to go next is illumined and propelled. The Dyslexia Debate is such a book. Elliott and Grigorenko have provided a breadth of topics and a depth of coverage to the complex issues surrounding dyslexia that should be read by researcher, practitioner, and parent. After reading their book, I feel enriched in all three categories.”

“No term has so impeded the scientific study of reading, as well as the public’s understanding of reading disability, as the term dyslexia. The retiring of the word is long overdue. Elliott and Grigorenko provide an impressive review of the evidence on why this is the case. I highly recommend the book for reading practitioners.”

“Difficulties in acquiring fluent reading skill are seen in large numbers of children in all languages and reading disability constitutes a significant educational and societal challenge. Over the last several decades there has been an explosion in multi-disciplinary research on the genetic, neurobiological, and cognitive bases of reading disability, and while there has been much progress in each domain, definitional (and theoretical) consensus remains elusive. In this beautifully crafted book, Elliott and Grigorenko, provide a sober and scholarly introduction to definitional debates and the ways in which emerging research on gene-brain-behavior pathways in reading disability might inform these debates. In my view, it is a must read for researchers, clinicians and educators looking to gain access to the current state of the art.”

“This is a thought-provoking book that rigorously examines the scientific evidence and ends up challenging many assumptions about the concept of dyslexia. Elliott and Grigorenko do not wish to deny the reality of children’s reading difficulties, but they do cast doubt on the usefulness and validity of our current diagnostic constructs. Essential reading for anyone interested in neurodevelopmental disorders.”

“This book provides a comprehensive and insightful analysis of all aspects of dyslexia. The assessment and intervention chapter is particularly important for parents, educators, and policy makers. A tour de force!”

“This book represents a significant contribution in the field towards addressing key issues that underlie dyslexia. Expert insights are provided on issues related to assessment and intervention. Particularly insightful is the authors’ examination of the role of cognition in the classification and intervention process. In general, the book more than succeeds in a quest to address several complexities related to the construct of dyslexia.”

Conference: The End of Dyslexia in Higher Education? May 7, 2014 (Advert)

Is dyslexia a middle class badge for illiteracy

Is it time to rethink dyslexia? (article written by Profession Elliott) and quoted in a THE report on Dyslexia

Dyslexia is a 'meaningless label used by middle-class parents who fear their children are being branded stupid', professor claims

Dyslexia is NOT a disease. It is an excuse for bad teachers – opinion piece by Peter Hitchens

Dyslexia may not exist, warn academics

Dyslexic students get extra support but what about those without the label who struggle with reading-9156970.html

Lorraine Kelly discussed Professor Elliott’s research with Andrew Pierce from the Daily Mail as part of their review of the papers. Professor Elliott appeared at 0735 – link to the dyslexia debate on ITV Daybreak.

The Dyslexia Debate – includes an interview with Professor Elliott

Durham academics say the term dyslexia should be abandoned

Students slam calls for dyslexia to be scrapped

Debate over use of term ‘dyslexia’

The term “dyslexia” should be ditched say educational experts

Debate over use of term ‘dyslexia’

Debate over use of term dyslexia

Debate over use of term dyslexia

Durham book authors say the term 'dyslexia' should be abandoned

Professor Elliott was interviewed about the Dyslexia Debate, and his book was discussed during a studio panel discussion.

Academics say dyslexia “may not exist”

Dyslexia – or just going through a bad spell?

War of Words Over Existence of Dyslexia

Experts from Yale and Durham say the term Dyslexia is unscientific

Dyslexia is a meaningless term

'Dyslexia' Is A Meaningless Label And Should Be Ditched

Dyslexia May Not Exist, Says Researchers At Yale And Durham Universities

Catholic Online (based in Los Angeles)

Is Dyslexia a meaningless label

Opposing Views (based in Los Angeles)

Professor: Dyslexia is a Meaningless Label Used by Middle-Class Parents Who Fear Their Children Are Being Branded Stupid’

Dyslexia organisations refute claim that diagnosis is without value

A Quiet Word... by Amanda Prowse

Dyslexia is a meaningless label

Dyslexia is a 'meaningless label used by middle-class parents who fear their children are being branded stupid', professor claims by Fiona Macrae

Why it's time to retire the dyslexic label

Why the pessimism over dyslexia?

Dyslexia 'is just a middle-class way to hide stupidity'

Is dyslexia a ‘meaningless label’? by Jessica Gibb

The term 'dyslexia' should be changed, as it is 'misleading' by Information Daily Staff Writer

Dyslexia: Does it really exist?

Debate over use of term Dyslexia

The dyslexia debate – is the label ‘meaningless’?