Muons are subatomic particles which we use as microscopic probes of magnetism and superconductivity. Current projects involve using these particles to investigate novel materials whose ground states are reached through a fine balance of interactions. We are interested in recruiting students to investigate several topics with muons.

(i) Molecular magnets are materials whose building blocks are organic molecules. These can be synthesised to have low-dimensional properties, allowing us to investigate physics in two, one, or even zero dimensions. Muons allow us to probe long range magnetic order and the exotic excitations of these systems.

(ii) Frustrated magnets are systems for which it is not possible to satisfy all of the competing magnetic interactions to find the materials' ground state. This often results in exotic quantum mechanical behaviour at low temperatures. These materials, which may be metal oxides or molecular magnets, exhibit a variety of quantum mechanical phenomena which may include the long sought-after spin liquid state. 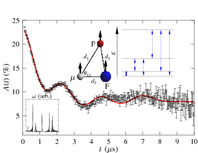