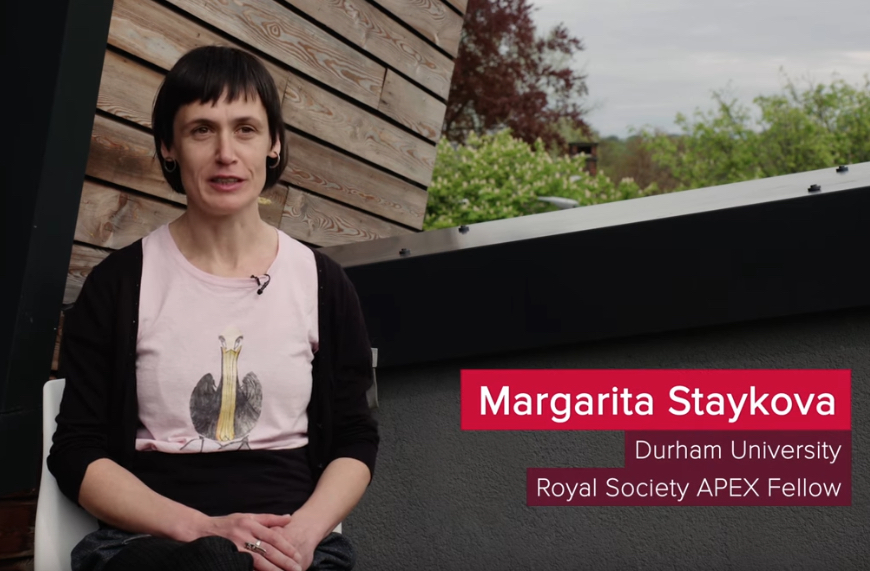 Dr Margarita Staykova from the Centre for Materials Physics has teamed up with Durham University sociologist Professor Tiago Moreira to discover some of the science and ethics of using microbes to create materials. Living materials are fabrics, paints and even building materials made with living cells. Would you wear a living shoe that you never had to throw away? Imagine a future where roads can self-heal, tiny robotic molecules can assemble themselves into household objects, and living buildings can harvest carbon dioxide to generate power and purified water. Would we be able to control how the cells evolved? Or, would we have to form symbiotic relationships with living materials similar to the relationships we had with working animals in the past?

We are pleased to announce that two Condensed Matter Physics postgraduates have won Physics Postgraduate Prizes this year. Congratulations to Alina Talmantaite, who has won the Graham Russell Prize, awarded for outstanding overall performance in applied Physics, and congratulations to Thomas Hicken who has won the Alan Martin PhD Prize, recognising the best Ph.D. thesis in Physics.

The low temperature electronic and magnetic behaviour of materials hosting a topological magnetic state known as a soliton has been explained by Durham scientists, with the help of muon-spin spectroscopy experiments made at the ISIS Neutron and Muon Source.

Muons found to be faithful probes of exotic superconductors

Researchers in the Centre for Materials Physics have demonstrated that spontaneous magnetic fields, detected by implanting sub-atomic muons in superconducting materials, are likely to be intrinsic to an exotic, time-reversal symmetry broken, superconducting state.

Durham Physics Department's Prof Tom Lancaster is one of the authors of a new textbook on Muon Spectroscopy, which has just been published by Oxford University Press.

In this review paper Paloma Lays dos Santos, Marc Etherington and Andy Monkman describe how thermally-activated delayed fluorescence can be tuned and controlled by chemical and conformational means; paving the way to new design principles.

Steve Smale, a renowned Fields medalist, listed 18 problems in mathematics and computer science for the 21st century. The 7th problem in Smale's list is how to choose configurations as close as possible to the lowest energy state for particles with equal charges that are confined to the surface of a sphere.

This paper springs from the Durham-Procter and Gamble research partnership, and is a good illustration of how industrial collaborations can frequently lead to fundamental new science.

There has been much recent interest in so called 'active matter', i.e., materials that are capable of powering themselves through a fluid using an internal fuel supply. Examples include shoals of fish, suspensions of swarming bacteria, or cell extracts that comprise of groups of molecular motors and long filaments.

A collaboration of scientists from the UK, Germany and the US have revealed the possibility of manipulating the number of dimensions of a material, in research published this week in Physical Review Letters. The work shows how it is possible to design magnetic materials which act as if they are made from two dimensional planes, one-dimensional chains or even zero-dimensional points. By making magnetic materials out of molecular building blocks - effectively nanoscale LEGO - the researchers have shown that it is possible to tune the number of dimensions of a system and that this strongly affects the properties of the materials.