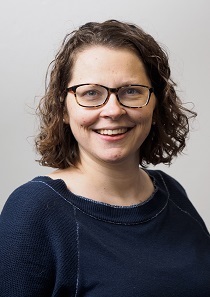 Amy Russell is a Roman historian whose research interests include the political history and topography of the Republic and early Empire. She was educated in Oxford and Berkeley and has lived and worked in Italy, the USA, and the UK. In 2018, she was awarded a Philip Leverhulme Prize. Her recent monograph, winner of the 2017 C.J. Goodwin Award of Merit, investigates the concept of public space and the construction and operation of the public/private divide in the Republican city of Rome. Her current project, funded by a two-year AHRC research grant, tackles the building activity of the imperial Senate and the contributions of multiple groups to the creation of imperial imagery and ideology. She also works on Republican political history, with ongoing interests in the tribunate of the plebs and the role of the populus; a further research interest is the interactions between scholarship written in German and the Anglophone world.

Dr Russell was co-chair of the Women's Classical Committee UK for 2017-19. She is an Athena Swan panellist, a member of the AHRC Peer Review College, and serves on the editorial board of the American Journal of Philology and the Libera Res Publica monograph series (Seville/Zaragoza). From 2020, she is the Roman History Area Editor for the digital Oxford Classical Dictionary.

'The politics of public space in Republican Rome': 2016 monograph for Cambridge University Press. I examine the nature of the public/private divide in Republican Rome by focusing not on the gradations of privacy available within the house, but how public space was marked, differentiated, and manipulated. Since completing the monograph, I have continued exploring notions of 'the public', 'publicness', and 'public opinion' in Roman Republican politics; a contribution on the role of gender in defining public and private (and vice versa) appeared in TRAC 2015, and has since been republished in Chinese translation (see below).

'Senatorial monuments and political identity': My current major project, funded by a two-year AHRC Leadership Fellowship grant, is a full-length investigation of senatorial building. Many major Roman monuments, from the Ara Pacis to the Arch of Constantine, were commissioned and built not by the emperor, but by the senate. How does it affect how we interpret these commissions if we take them seriously as senatorial as well as imperial monuments? This project forms part of an even wider research theme on the creation of imperial ideology at multiple social levels, which I am pursuing in collaboration with colleagues at Durham and around the world. My exploration of this theme began with a workshop in Durham in 2014 on the emperor's image; two more workshops in 2016 and 2017 took on broader themes connected to the social dynamics of image-making, and will result in a volume co-edited with Dr Monica Hellström.

'POPVLVSQVE': My next major project will be an investigation into the Roman Republican populus, the citizenry incorporated as a group. The populus has sometimes been called Rome's sovereign body, but what does that mean? Sometimes it could be thought of as equivalent to the state (allies of Rome are referred to as 'allies of the populus Romanus'), while at other times it was only one constituent part of the senatus populusque Romanus, the famous SPQR. How do discourses of majoritarianism and republicanism work in a world where the people are figured as the state? How did a group of individuals coalesce into this defiantly singular and unitary institution?

Alongside the monograph, this project builds towards a major interdisciplinary exploration of how individuals come together to form groups which have legal, political, or cultural definition. In the spring of 2019, I led a series of events at Durham's IAS involving lawyers, political scientists, historians, human geographers and more: 'Who are "We the People"? Community beyond the state'.

'The spatial turn in Roman studies': A series of events and publications looking back at a generation's worth of scholarship on space in the Roman world, and forward to the future. Find out more here.

'Political culture in the Late Republic': I have recently begun a broader investigation into the political culture of the Late Republic, and in particular the way the concept of political culture has entered scholarly discourse in German-speaking and Anglophone countries. My plans include a volume of new translations for students of important German articles from the past twenty years, co-edited with Prof. Hans Beck of McGill University, Canada. The project was launched with a panel at the Society for Classical Studies annual meeting in 2016 on 'Thinking through German scholarship on the Late Republic', and the volume is under contract with CUP.

'3D modelling: architecture and visibility': In collaboration with Dr Matthew Nicholls at Reading, I am working on a project which uses a digital 3D model of ancient Rome to explore research questions related to architecture, spatial experience, and lines of sight. How much of Rome's fabulous architecture was actually visible from the street? How did architects build to take advantage of the lines of sight afforded by the city's hills? This project demonstrates the new research questions and approaches made possible by digital reconstruction.

Some of my papers are available at https://durham.academia.edu/AmyRussell.

I supervise PhDs and postdoctoral research on many aspects of Roman cultural and political history, with a particular interest in projects that bring together historical and literary, visual, or topographical methodologies.

PhD students for whom I am first supervisor:

Paula Rondon-Burgos: The Political Functions of Villas in the Works of Cicero

Postdoctoral researchers for whom I am host or mentor:

I am available to speak at schools and similar venues. Potential topics include:

I am happy to discuss other possible topics.