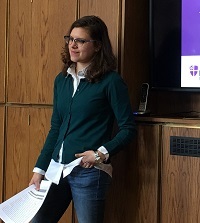 I completed both my BA in Classics (2014) and MA in Philology and Literary Criticism (2016) at the University of Trento, Italy. During my degrees, I also spent a period in Germany (University of Freiburg) as an Erasmus student and another in the US at Columbia University (New York). In my MA, I was involved in teaching activities at the University of Trento, where I worked as a Tutor of Latin. Before starting my PhD at Durham University in October 2017, I worked briefly as a doctoral researcher at Sismel (Florence) and as a Classics teacher in an Italian high school (Liceo Cavour, Turin). In Fall 2019 I spent a semester at Harvard University as a Visiting Fellow, where I was supervised by Professor R.J. Tarrant.

My research interests include Augustan poetry (Ovid), Senecan tragedy, gender studies; Medieval Latin (reception of Phaedrus in the Middle Ages). Alongside my thesis, I've been working on four journal articles (Her. 15; Her. 11; Seneca's Thyestes; Hypsipyle in Ovid and Statius), which I've recently submitted or I'm planning to submit shortly, as well as several book chapters. In addition to this, I am reworking part of my Master Thesis on the Latin Romulus to turn it into a book to be published with the University of Trento Press (this work is supervised by Prof. Caterina Mordeglia, University of Trento); and I actively collaborate with the Sismel, by providing reviews of books and academic articles for Medioevo Latino, which is a bibliographic bulletin issued annually – for a full CV including a list of (and links to) some of my publications, talks and papers see https://durham.academia.edu/SimonaMartorana.

As I consider teaching and dissemination very important, beyond working as GTA in the Classics Department and taking part in conferences and other kinds of training, I convened two interdisciplinary workshops, respectively on “Gender and Construction of Subjectivity” (10th of May, Durham) and on Authorship (23rd of May, Newcastle). Finally, I'm co-organising two panels at the next CA (2020) and one panel at the CCC in Lyon (2020).

My research explores the single Heroides by means of literary criticism, psychological, anthropological and gender-based approaches; it also examines the collection in the light of its contemporary socio-political context, focusing in particular on the concept of motherhood.

The theoretical frame to which I refer when talking about ‘a gender-based approach’ mainly consists of the French feminist writers, the critical works on gender performativity (e.g., Butler), as well as feminism criticism more widely – especially if applied to motherhood studies (within classical scholarship, cf., e.g., Augoustakis 2010, McAuley 2016). According to this approach, the Heroides may be interpreted as examples of écriture féminine, which gives expression to female voices (Cixous 1976) in spite of the male poet behind them. In this way, these letters would represent a sort of enclave within a wider patriarchal-based context, in which femininity takes a subversive attitude against the symbolic space established by the Law of the Fathers (cf. Spentzou 2003). This results in the temporary re-creation of a new language and an autonomous space – a sort of “room of one’s own”, in Virginia Woolf’s words – for the female voice.

While primarily relying on this interpretative frame, in my work I also underscore the continuous alternation between two discordant voices within these characters themselves. The first of these two voices pertains to the heroines in their condition of abandoned and unfortunate elegiac lovers; the second one, by contrast, is the result of a more independent and ‘dissident’ attitude, which, indeed, leads them to have their own ‘say’ and tell their side of the story. These two voices alternate with and, sometimes, cross each other, creating, thus, a continuous fluctuation in the heroines’ words and behaviours. This sort of inconsistent attitude is, moreover, a result of Ovid’s usual modus operandi in the creation of his characters, characterised by irony and ‘manipulation’ of previous sources and myths. In the Heroides, in fact, such a fluctuation is even more enhanced by the heroines’ motherhood, which crystallises their conflicting relationship with their own feelings and corporality, as well as partners, social and family roles; and, of course, with their children.

By reading these heroines both as an expression of Ovid’s poetry and as personae expressing their own female voice, I try to pursue a ‘third’ way between a pure resisting and a releasing reading (Salzmann-Mitchell 2005), demonstrating that reading the women does not imply necessarily that the male poet behind them is obliterated.