Associate Professor in the Department of Chemistry
Telephone: +44 (0) 191 33 42123
Room number: CG105L
Member of the Biophysical Sciences Institute
Member in the Centre for Sustainable Chemical Processes

My research group employs the mechanistic tools of physical organic chemistry to approach biological and synthetic chemistry problems. Key themes are the use of kinetics and the understanding and exploitation of physicochemical properties to enable more effective synthetic chemistry and bioconjugation procedures.

We use these ideas to deliver new methods for the preparation of nucleosides and nucleotides. Our ability to understand reactivity, especially in aqueous solutions, has enabled us to develop convenient bioconjugation procedures for nucleic acids. Our mechanistic approach is also applied to enzymes and understanding polysaccharide biopolymer systems. Our research group is affiliated to the Durham-York Research Consortium.

We use aqueous and non-aqueous approaches to prepare nucleosides, nucleotides and phosphate ester mimics. Nucleosides are challenging substrates for synthetic chemists because of their solubility characteristics. They are often barely soluble in both organic solvents and water as a result of intermolecular interactions between nucleoside molecules. This problem is particularly acute for guanosine systems that form gels through hydrogen bonding interactions between guanine base units. We have overcome this problem through using basic conditions that remove a key hydrogen bond donor owing to its relatively low pKa value (~9.5). Once the proton has been removed, substrates are soluble in aqueous media, however, this mandates the use of other tactics to allow functional group transformations to take place and subsequent purification of crude materials to be undertaken.

When organic solvents are employed, there is a requirement to use organic-solvent-soluble phosphate anions to prepare nucleoside di- and triphosphate species. Traditionally, alkylammonium salts have been used in this role, however, they are extremely hygroscopic and the water that they introduce can often have hugely deleterious effects on methods that are used to form phosphoanhydride bonds. We have prepared an alternative organic cation-pyrophosphate salt that does not take up moisture and is a convenient replacement for alkylammoniums. 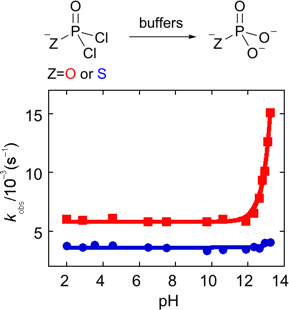 We use kinetics to understand how molecules react with each other and how we can improve selectivity through understaning the relative rates of competing hydrolysis processes. Phosphorus (V) chlorides are often considered to be incompatioble with water, however, through understaning the relative rates of hydrolysis vs aminolysis processes we have developed 'click' processes that use POCl3, PSCl3 and their hydrolysis products, which are also effective phosphorylating agents.

We have found that phosphodichloridate anion and its thio analogue, which are both water soluble, are highly selective N-phosphoryaltion agents. Their selectivity derives from the fact that they are anionic AND electrophilic, thus they discriminate against hydroxide anion as a competing nucleophile, but not against neutral amines. Their half-lives are in the order of minutes making them convenient to use without needing rapid mixing systems. 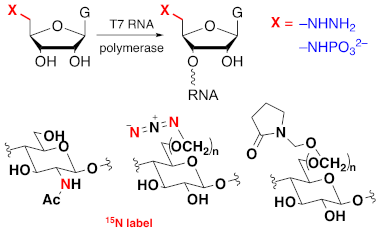 We have developed suites of bioconjugation protocols for nucleic acid and polysaccharide biopolymer systems. Our nucleic acid studies build on our synthetic protocols that give ready access to guanosine derivatives that are initiators for T7 RNA polymerase. The 'handles' that are incorporated can be readily modified with affinity tags or fluorphores for immobilisation and detection purposes.

Polysaccharide biopolymers are the most abundant resources offered by nature and we can capitalise upon them through the development of new conjugation techniques that provide modified systems with new materials properties and bioactivities.