On 1st-3rd April 2014, Durham University’s School of Biological and Biomedical Sciences played host to this year’s Schools Science Festival. Twenty-five schools from the surrounding area brought groups of 13-15 year old students to experience a day of the fun side of science.

To enlighten the next generation to the wonders of chemistry, Durham University’s Department of Chemistry supplied two groups of enthusiastic PhD students with activities of their own devising.

Cool Chemistry, designed and delivered by Anna Prentis, Jas Sanghera, Beth Kazmierski and Laura Bingham, demonstrated the power of cryogens; showing that there are things colder than Durham in winter! From elephant’s toothpaste to witch’s cauldrons, Cool Chemistry exhibited an extensive and exciting range of demonstrations, full of steam, colours and bubbles. Ending with an impressively messy foam fountain, often soaking those demonstrating it. Cool Chemistry was definitely a memorable introduction to low temperatures and a new look at the gases in the air around us.

Science, Soap and Slime, run by Melissa Goodwin, Kieran Atter, Oliver Burnham and Andrew Hones, offered a messy and hands on introduction to polymers. Briefly touching on more every day polymers, such as plastic bags, the students soon got to try their hands at making slime. Carefully mixing two solutions together, followed by a vigorous stirring, resulted in a fresh batch of their own purple slime. After initial disgust at the cold wet goo, the students did some basic tests of its properties: namely shaping balls, bouncing, stretching and tearing. The session moved on to some very different, but still polymeric, materials. Manipulating and shaping the foam ‘crazy’ soap (a good trick to get hands washed) and finally a competition building towers of touchable bubbles.

With over 800 visitors, the Schools Science Festival was a brilliant opportunity to show young people that science is an interesting and viable career choice. The activities were seemingly enjoyed by all that participated and hopefully left a lasting impression that chemistry isn’t all formulae and stuffy classrooms! 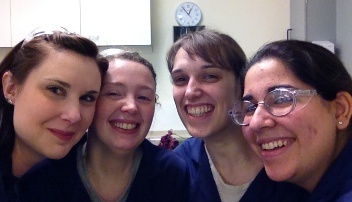