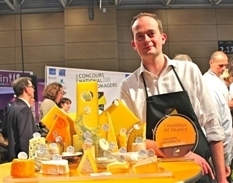 Durham Chemistry graduate Matthew Feroze has won the title of France's most talented cheesemonger by winning the Concours National des Fromagers at the Salon Mondiale de Restauration et Hôtellerie during a two year break from his career as a government accountant. The competition involved the blind tasting of cheeses, cutting cheeses to specified weights, and the presentation of a cheese platter he had selected and matured himself, where he included two English cheeses.

Matt graduated with an MChem from Durham University in 2004, completing his final year project with Prof. Paul Low.

This story has received coverage in the national media, including the Daily Mail and Independent.

His book "The Cheese and I" is published next week and tells the story of the dream of an Englishman to become a cheesemonger in France; it is available from all good booksellers.