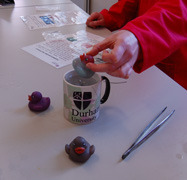 Congratulations to Geri Rosser (final year PhD student, Department of Chemistry), who has recently been awarded one of the ten available £100 bursaries to attend British Interactive Group conference in January 2013. The conference will give Geri the opportunity to further develop her STEM communication skills to assist her with her work as a Science Animator and in her role in the department's Outreach team. Geri works regularly with local school children to engage youngsters and to inspire them into science (particularly chemistry), and she was recently a key part of the department's team for the Celebrate Science festival, a flagship University outreach festival held each October.