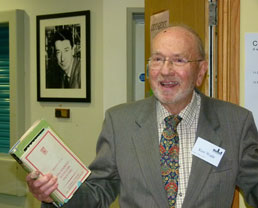 Ken opening the Coates Laboratory in 2011

Prof. Ken Wade's many contributions to Durham Chemistry and to the University as a whole over more than 50 years have been recognised by the award of the Chancellors Medal.  The award was presented at a gala dinner in the Castle on Wednesday evening with an oration delivered by Jim Feast.

Professor Ken Wade FRS is one of the most illustrious former members of staff of Durham University and is an Emeritus Professor in Durham’s Department of Chemistry.

Professor Wade graduated with a BSc Honours (First Class) in Chemistry from the University of Nottingham in 1954, followed by a PhD in 1957, and a DSc in 1970.

During his career Professor Wade has held academic posts at the universities of Cambridge (1957 – 1959) and Cornell, USA (1959 - 1960).  He joined Durham University from Derby Technology College as a lecturer in inorganic chemistry in 1961, rising through the department to Senior Lecturer and Reader before being appointed Professor of Chemistry in 1983. During his Durham career he has been chair or a member of numerous departmental and university committees including President of the Society of Fellows (mid 1990’s), governing body/council of St Mary’s College (1992-2002), assisting in senior roles on the University’s Stockton Campus (1997-2002), and pioneering MSc courses there. A lecture theatre in the Calman Learning Centre is named in his honour.

During his first decade at Durham, Professor Wade set up a thriving research group probing covalent chemistry of main group metals and metalloids, and wrote or co-authored three books (on organometallic compounds, on principles of organometallic chemistry, and on electron deficient compounds), that charted and influenced global developments in these rapidly expanding fields.  Interests in structural and bonding issues led him to devise simple electron-counting rules to explain or predict the polyhedral structures of so-called 'electron deficient' cluster compounds such as boron hydrides that had challenged earlier bonding descriptions, transforming these apparent rule-breakers into pattern-makers for a wide range of other compounds.  These are known as "Wade's Rules" around the world, but in Durham were always taught under the name "polyhedral skeletal electron pair theory"!   Refining and developing his rules, exploring various aspects of organometallic, cluster, polymer, materials and catalysis chemistry, and demonstrating the relevance of boron hydride chemistry to hydrocarbon chemistry, have occupied him fully subsequently.

He is the author of over 200 research publications and his latest co-authored book, the second edition of "Hypercarbon Chemistry", appeared in 2011.

Since his retirement in 1997 Professor Wade continues to represent Durham University with extraordinary energy and zeal and is still actively engaged with the Department and its alumni. Many of Professor Wade's past students and colleagues returned to Durham in 2011 as part of Chemistry's celebration of 50 years in their current building. The award of the Chancellor’s medal is a fitting climax to Ken's service to Durham University over the same 50 year period.