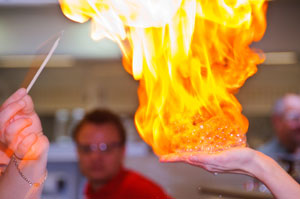 Chemistry marked 50 years in its current building on 23rd and 24th September 2011 with an alumni reunion to celebrate the many achievements over that period.  We were delighted to welcome around 400 attendees, who had associations with the Department dating back to 1950!

On Friday 23rd events were opened with a talk on "Durham Chemistry, past present and future" by the Head of Department, Prof John S.O. Evans.  John gave an outline of the history of the Durham starting from the first British science publication around 700 AD up to the modern period.  He highlighted the importance of James Finlay Weir Johnston, the first Durham lecturer in Chemistry and Mineralogy who was appointed in 1832.  Johnston is perhaps best remembered locally via the naming of Durham Johnston school, but was an influential chemist and made many other contributions to the locality.  The enormous contributions of many people in building today's successful department were described, and John finished by outlining how the Department is positioning itself for the next 50 years.

We were also delighted to host a public lecture to celebrate the International Year of Chemistry on the life of Marie Skłodowska-Curie, who was awarded the Nobel prize for chemistry in 1911 (her second).  The lecture was given by Prof Andrzej Wróblewski who started with a crash course in Polish-for-beginners, before describing the many achievements of Curie.  We were treated to an insightful, engaging and entertaining description of how science developed around the turn of the century, which teaches much about how modern science is, or should be, conducted.  Prof Wróblewski left us in no doubt as to the enormous contributions Marie Curie made.

On Friday evening a birthday dinner was held in Grey College, with an after-dinner vote of congratulations given by the Vice-Chancellor, Professor Chris Higgins.

On Saturday the Department held an open day for alumni, staff, friends and their families.  The very young tackled a chemistry treasure hunt, while some of the older children used the Department's state-of-the-art analytical equipment to try and solve a "crime" CSI-style.  We were also treated to demonstration lectures on " Light - the use of Europium in the Euro and fluorescent budgerigars" by Andy Beeby and "Favourite School Science Experiments" by Jacquie Robson.  Needless to say, there were plenty of flashes and bangs in the newly-refurbished lecture theatre, and the audience enjoyed seeing Helen Dunipace (who signed the lectures for the hard-of-hearing) jumping for safety!

Jacqui also helped coordinate a series of interactive demonstrations in the teaching laboratory, which grabbed the attention of delegates aged from 6 months to 80+ years.

The Department also chose the occasion of their 50th year in the building to celebrate the many contributions made to Durham Chemistry by Prof. Geoffrey Coates, who was head of Department from 1953 to 1968.  Prof. Ken Wade (Head of Department 1986 to 1989) performed the opening ceremony for the naming of the synthetic teaching laboratory as "The Coates Laboratory".  During an engaging and entertaining address, Prof. Wade outlined many of Coates' contributions to both Durham Chemistry and to the important area of organometallic chemistry, where his contributions had international impact.  One highlight of Prof Wade's address was how Coates surprised a lecture theatre audience when he returned to the Department in the 1970s by appearing dressed as a cowboy.  He apparently attempted to throw his cowboy hat into the audience, only to hit somebody sitting in the front row.  The unfortunate victim (Gerald Brooke) was present to hear the story, demonstrating both the long-term continuity of staff contact with the Department and, by his smile, their forgiving nature!

Between events, we were able to show many old members of the Department the laboratories they had worked in, and how those areas have been refurbished to allow modern cutting-edge research.  One highlight was reuniting Prof. Arthur Bannister with the glove box he purchased in the 1970s, which is still functioning today!  He purchased wisely!

We were also delighted to be able to show attendees the award-winning Durham 3D movie on the origins of the universe thanks to the help of Dr Nick Holliman from Engineering and Computer Science and Professor Martin Ward from Physics using the University's specially equipped lecture theatre.  Delegates were able to ask Professor Ward challenging questions, ranging from the very start of the universe to the latest controversial results about particles exceeding the speed of light.

The celebrations were concluded with a short address from Prof. Evans, which was followed by a spontaneous rendition of "Happy Birthday" from the audience.

We'd be delighted if those attending would like to send in other pictures from the day, or share any of their memories of the Department via our alumni wiki: http://chemistry-alumni.dur.ac.uk/wiki/doku.php

Professor Evans commented, "for me this was a wonderful event, celebrating what makes Durham a very special place to carry out chemistry.  It was a delight to welcome back the people who helped create the modern Department, and to show them that it's still an incredibly vibrant place, undertaking world-leading research and providing a world-leading education in Chemistry."