The “Durham Lectures” are the Chemistry Department’s flagship lecture series.

Every year we invite an internationally leading chemist to give a series of lectures within the Department to highlight a topic area of modern chemistry research. The first lecture is usually targeted to a general audience, with follow up lectures building on that material to address the latest research challenges in the field.

The series was inaugurated in 2006 by the 2005 Nobel Laureate in Chemistry, Professor Bob Grubbs. Details of each of the subsequent Durham Lecturers is given in the box to the right.

Mike obtained his Ph.D. from the University of Birmingham in 1978 under the supervision of John Simons. He was a Research Fellow of Jesus College in Oxford with Gus Hancock and then a research associate in Bristol with Richard Dixon before taking up a lecturership in 1984 in Bristol. He has remained in Bristol ever since and was made professor in 1992.

Synthesis and Applications of Diamond

This Lecture will introduce diamond, describe how it can now be synthesised, outline some of its spectacular properties and show how these enable applications in machining and drilling, in thermal management, in electrochemistry, sensing and magnetometry. The presentation has been prepared for a general audience and will provide illustrative samples and a demonstration.

Diamond is now routinely synthesised by chemical vapour deposition (CVD) methods. Most commercial diamond CVD employs microwave (MW) activated C/H (typically CH4/H2) gas mixtures. Many previous studies have sought to explore and optimise such activated gas mixtures, and the ways in which the radicals present can add to the growing diamond surface. Our activities in this area have involved:

(ii) complementary two-dimensional modelling of the plasma chemistry and composition with the aims of rationalising the spatial resolved experimental column density data and predicting the concentrations of other key gas phase species (e.g. CH3 radicals, now generally considered to be the dominant growth species) that are not amenable to spectroscopic detection, as functions of process conditions, and

(iii) quantum mechanical (QM) and QM-molecular mechanics calculations of the energetics of the elementary steps by which radical species add to, migrate on and eventually accommodate on a growing diamond surface.

This presentation will concentrate on the growth of undoped diamond from C/H gas mixtures, but also touch on other recent (e.g. doped diamond growth) and future research directions.

Molecular photodissociation: past, present and future. A personal perspective.

Photodissociation is one of many possible fates that may befall an excited state molecule following absorption of an ultraviolet (UV) photon of light. This presentation will (i) highlight some of the extraordinary progress made in probing and understanding the evolution and decay of photoexcited molecules during my academic career, and (ii) introduce some of the emerging opportunities for studying such processes using ultrafast pump-probe methods (i.e. for watching bond fissions and/or other molecular rearrangements in real time).

New Materials for a New Age

Every advance in human civilization, from the Stone Age to today’s Silicon Age, has been driven by a development in materials. Nicola will present a new class of materials – multiferroics – that are both a playground for exploring exciting fundamental science, and a potential enabler of transformative beyond-silicon technologies.

From Materials to Cosmology: Studying the early universe under the microscope

The behavior of the early early universe just after the Big Bang is one of the most intriguing basic questions in all of science, and is extraordinarily difficult to answer because of insurmountable issues associated with replaying the Big Bang in the laboratory. One route to the answer -- which lies at the intersection between cosmology and materials physics -- is to use laboratory materials to test the so-called "Kibble-Zurek" scaling laws proposed for the formation of defects such as cosmic strings in the early universe. Here Nicola will show that a popular multiferroic material -- with its coexisting magnetic, ferroelectric and structural phase transitions -- generates the crystallographic equivalent of cosmic strings. Nicola will describe how straightforward solution of the Schroedinger equation for the material allows the important features of its behavior to be identified and quantified, and present experimental results of what seem to be the first unambiguous demonstration of Kibble-Zurek scaling in real materials. She will end with some very recent data showing that things might be less unambiguous than they seem.

Most magnetic materials, phenomena and devices are well described in terms of magnetic dipoles of either spin or orbital origin. There is mounting evidence, however, that higher-than-dipolar order multipoles both exist (often in hiding) and lead to intriguing magnetic behaviors. In this talk she will discuss the relevance of the so-called magnetoelectric multipoles, which form the next-order term, after the magnetic dipole, in the multipolar expansion of the magnetization density with the magnetic field. First Nicola will describe how magnetoelectric multipoles underlie multiferroic behavior and in particular how they determine the magnetic response to applied electric fields. Then she will discuss signatures of hidden magnetoelectric multipolar order, how it can be unearthed using density functional theory calculations and possibilities for its direct measurement. Finally, she will argue that such magnetoelectric hidden order occurs in the high-Tc cuprate materials, where it is likely relevant for the superconducting behavior, and therefore provides a link between multiferroism and exotic superconductivity.

A native of Sunderland in the North East of England, Nicola studied at Cambridge University, where she obtained a B.A. in Natural Sciences in 1991. She then moved to the University of California, Berkeley, where she earned her PhD in Chemistry in 1996. She next worked as a postdoctoral researcher in the Applied Physics Department at Yale University, before moving back to California, where she was Assistant Professor (1997-2002), Associate Professor (2002-2006) then Full Professor (2006 - 2010) in UC Santa Barbara’s Materials Department. She moved to ETH Zürich in 2011.

She was elected a Fellow of the Royal Society (FRS) in 2017.

Nicola is a passionate science educator, director of her department’s study program, and holder of the ETH Golden Owl Award for excellence in teaching. When not trying to make a room-temperature superconductor, she can be found playing her clarinet, or skiing or climbing in the Alps.

Research in Nicola Spaldin’s Materials Theory group uses a combination of first-principles and phenomenological theoretical techniques to study the fundamental physics of novel materials that are of potential technological importance. Projects combine the development of new theoretical methods, application of the methods to existing materials, design of new materials with specific functionalities and subsequent synthesis of the "designer materials". Specific materials classes of interest are magnetoelectric multiferroics, which are materials that are simultaneously ferromagnetic and ferroelectric, and transition-metal oxides with "strong correlations", which often result in multiple coupled or competing instabilities, which in turn show strong tunable responses to electric or magnetic fields or strain. 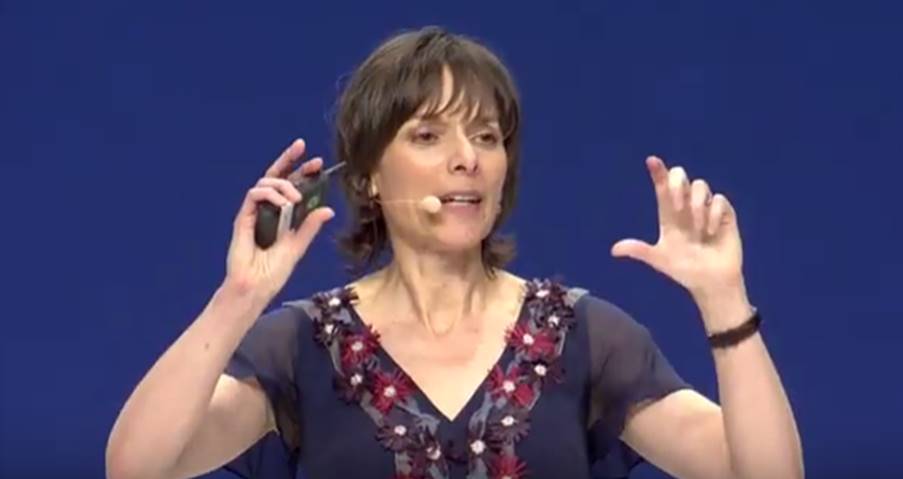