The Uneven Impact of Welfare Reform: The financial losses to places and people. WRI and CHIR Guest Lecture by Professor Christina Beatty 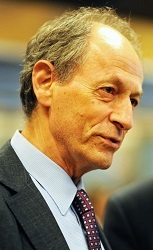 The Wolfson Research Institute for Health and Wellbeing are delighted to host our Annual Guest Lecture by Professor Sir Michael Marmot, MBBS, MPH, PhD, FRCP, FFPHM, FMedSci, FBA. His lecture is entitled 'The Health Gap: the challenge of an unequal world'.

We are also delighted the Vice Chancellor, Professor Stuart Corbridge will introduce the lecture and Chair the Questions and Answers session.

There are dramatic differences in health between countries and within countries. These health inequalities defy usual explanations. Conventional approaches to improving health have emphasised access to technical solutions – improved medical care and sanitation; or behaviours – smoking, drinking and obesity. These approaches only go so far. Creating the conditions for people to lead flourishing lives, and thus empowering individuals and communities, is key to reduction of health inequalities.

Michael Marmot looks at evidence from round the world to show how we can reduce the health gap.

Sir Michael Marmot is Professor of Epidemiology at University College London, and President of the World Medical Association. He is the author of The Health Gap: the challenge of an unequal world (2015) and Status Syndrome: how your place on the social gradient directly affects your health (2004).

Professor Marmot holds the Harvard Lowns Professorship for 2014-2017 and is the recipient of the Prince Mahidol Award for Public Health 2015. He has been awarded honorary doctorates from 14 universities. Marmot has led research groups on health inequalities for 40 years. He was Chair of the Commission on Social Determinants of Health (CSDH), which was set up by the World Health Organization in 2005, and produced the report entitled: ‘Closing the Gap in a Generation’ in August 2008. At the request of the British Government, he conducted the Strategic Review of Health Inequalities in England post 2010, which published its report 'Fair Society, Healthy Lives' in February 2010. This was followed by the European Review of Social Determinants of Health and the Health Divide, for WHO Euro in 2014.

He chaired the Breast Screening Review for the NHS National Cancer Action Team and was a member of The Lancet-University of Oslo Commission on Global Governance for Health. He set up the Whitehall II Studies of British Civil Servants, investigating explanations for the striking inverse social gradient in morbidity and mortality. He leads the English Longitudinal Study of Ageing (ELSA) and is engaged in several international research efforts on the social determinants of health. He served as President of the British Medical Association (BMA) in 2010-2011, and is President of the British Lung Foundation.

He was a member of the Royal Commission on Environmental Pollution for six years and in 2000 he was knighted by Her Majesty The Queen, for services to epidemiology and the understanding of health inequalities.

Internationally acclaimed, Professor Marmot is a Foreign Associate Member of the Institute of Medicine (IOM), and a former Vice President of the Academia Europaea. He won the Balzan Prize for Epidemiology in 2004, gave the Harveian Oration in 2006, and won the William B. Graham Prize for Health Services Research in 2008.