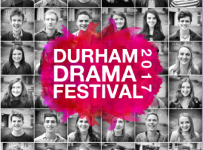 The three plays featured in The Assembly Rooms Theatre night are:

‘I thought they wanted soldiers.’ Four long years later, Toll realised the army wanted much more from him. Join Oliver Clemence Soanes, or ‘Toll’ to his friends, as he recalls his memories of the so called ‘Great’ War. From plucky recruit to shell-shocked survivor, this is a true story of the horrors of war unlike any other.

‘Alford and the Acid Tip’
written and directed by Kate Lipson

California. USA. The local penitentiary’s Death Row is in full swing. But not if three protesters can help it. Follow their journeys through mind, matter, and surreality. From game shows to prison gates, ‘Alford and the Acid Trip’ is a hallucinogenic comedic exploration of the capital punishment and its consequences.

‘Screen 9’ is a documentary piece which is a culmination of over a year’s worth of research into the Aurora shootings in Colorado during a showing of 'The Dark Knight Rises' in 2012. The script follows four characters, created from interviews with American citizens, survivors, articles, press releases, blogs, videos, tweets, and trial coverage. The play follows the before, during, and aftermath of the event, focusing on how individuals respond and cope with tragedy. Every single line has been resourced and nothing has been fabricated.