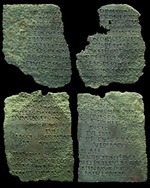 Join the Museum of Archaeology Durham University for this yearâ€™s Festival of Archaeology as we celebrate a new and important addition to the display.


Found in 2016 by metal detectorist Mark Houston near Lanchester, Co. Durham, this is the first complete Fleet Diploma to be discovered in the country and reveals the identity of one of Britainâ€™s first named sailors. The diploma is made of a copper alloy and is now broken into 8 fragments, although it would have originally consisted of 2 rectangular bronze plates which were attached together with metal wires.

Roman Military Diplomas were the physical proof of rights granted to non-citizen soldiers to mark their honourable discharge on retirement after 26 years of service. This diploma was issued by the emperor Antoninus Pius (AD 138-191) to Tigernos, a native of Lanchester, Co. Durham, in around AD 150. The diploma granted him and his descendants Roman citizenship and the legal right of marriage. To earn the diploma he had served in the Classis Germanica -the Roman fleet in Germany, most likely for 26 years, before being honourably discharged on his retirement.

The diploma contains a wealth of information which is still being translated and researched. Mark brought the diploma to the attention of the Portable Antiquities Scheme, who were instrumental in the reporting, recording, identification and final acquisition by the Museum of Archaeology.

The diploma will not only provide information on governors, consuls, and commanders, such as the then Prefect of the German Fleet, Marcus Ulpius Ulpianus, but we are hoping that it will also allow researchers to map the career of Tigernos.

17:30-18:30 After the talks there will be a drinks reception and an opportunity to view the diploma and the MA Museum and Artefacts student temporary exhibition DECAY.

If you would like to attend please email archaeology.museum@durham.ac.uk