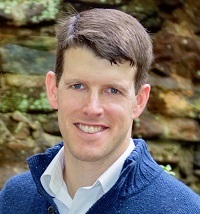 The Michael Ramsey Centre for Anglican Studies is delighted to announce the appointment of Dr Brian Powers as the first Vann Fellow.

As a former officer in the U.S. Air Force and a veteran of the conflicts in Iraq and Afghanistan, Dr Powers is interested in the ways that Christian theology shapes and also fails to shape thinking about contemporary moral, ecclesial and political issues – most notably, those involving identity, justice and violence.

He is a graduate of Emory University’s Graduate Division of Religion, having earned his Ph.D in the Theological Studies area. His forthcoming monograph from William B. Eerdmans press is a constructive work entitled Full Darkness: Original Sin, Moral Injury and Wartime Violence.

Brian takes up his position as the first Vann Fellow at the start of the new academic year. The fellowship is set up for holders to study and illuminate the relationship of Christianity and the armed forces across time and space, across Christian traditions, and across many subject areas. It is named in memory of The Revd Bernard William Vann VC, who was killed in action in 1918, and was the last British clergyman to be awarded the Victoria Cross in the First World War.