Publication of 'Death, Life and Laughter: Essays on Religion in Honour of Douglas Davies', edited by Mathew Guest and Martha Middlemiss-Le Mon 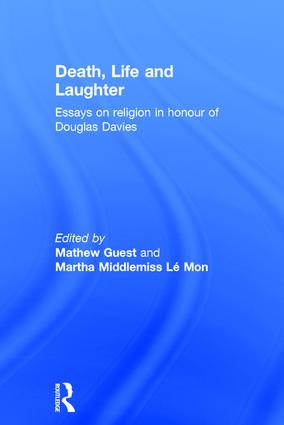 We are delighted to announce the publication of a festschrift for our colleague Professor Douglas Davies, to celebrate and engage with his immense contribution to scholarship in the study of religion.

Birth, death and the rituals that take us from one to the other tell us a lot about humanity and our quest to understand ourselves. It is cross-disciplinary analyses of the life course that have generated the most profound insights into religion and spirituality, challenging the concepts and methods we commonly use to understand these universal aspects of human experience. Douglas Davies' work is a rare example of this kind of scholarship, challenging the boundaries that separate theology from the social sciences and that divide academia from public life. This book serves as a tribute to Davies' work and a critical commentary on the questions that arise from it. Featuring essays by renowned international scholars – including Anders Bäcktrom, James Beckford and David Martin – and a critical response from Douglas Davies himself, this book brings cutting-edge research into conversation with ongoing debates about disciplinary difference and the nature of scholarship.

Death, Life and Laughter: Essays in Honour of Douglas Davies is published by Routledge and is available in hardback, paperback and e-book formats. For further information, see:
https://www.routledge.com/Death-Life-and-Laughter-Essays-on-religion-in-honour-of-Douglas-Davies/Guest-Middlemiss-Le-Mon/p/book/9781409457022