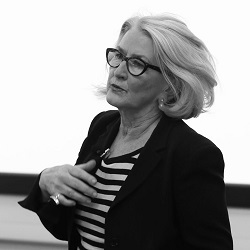 A political economist, Ann Pettifor is one of the leading analysts of the global financial system. She has consistently challenged political and economic orthodoxy, being one of the few economists who successfully predicted the 2007-2008 financial crisis. She was one of the leaders of the Jubilee 2000 debt cancellation campaign, which led to the cancellation of over $100 billion of debt owed by 35 countries. In 2008, she helped to author the Green New Deal, which seeks to put economic and social justice at the heart of the fight against climate change, and which has now been taken up in the US by Alexandria Ocasio-Cortez. 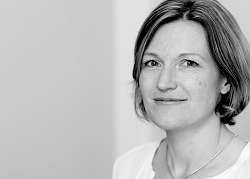 Helen Mountfield is a British human rights barrister, legal scholar and current principal of Mansfield College, Oxford. She is particularly well-known for cases concerning discrimination and equality in public law, employment, commercial and other contexts, and has appeared frequently in the Supreme Court. Helen was leading advocate for the 'People's Challenge' group in the litigation brought in the Supreme Court which successfully challenged Theresa May’s attempt to trigger Article 50 to leave the European Union without the approval of a parliamentary vote. I knew her and her daughters growing up and find her inspirational not just because of the work she has done in her career, and the fact she is extremely intelligent, but because she is also very kind.

In July 1960, at the age of 26, Jane Goodall began her primatology field work researching chimpanzees in Tanzania. During this fieldwork, Goodall made ground-breaking discoveries surrounding chimpanzee sociality and tool use, these scientific discoveries are now regarded as some of the greatest of the twentieth-century. Primatology has historically been hugely male dominated, but the success of Goodall’s career has promoted the movement of women into the field and into science in general.

Goodall has also gained merit for her work as a conservationist and humanitarian. Goodall identified the importance of local communities in sustainable conservation, enabling the protection of many vulnerable species, especially chimpanzees. Additionally, Goodall also supports the education and inclusion of young people in conservation and has established her own youth program called Roots & Shoots.

Jane Goodall inspires me because she has demonstrated how empathy and love can empower you to make positive changes in the world. She inspires me to act in a considerate way and to think about how this might influence the actions of others positively.

Jocelyn Bell Burnell is a Northern Irish physicist who, after graduating from the University of Glasgow went on to do a PhD in astrophysics at Cambridge. During this time she conducted an experiment which detected the first rapidly rotating neutron star. This was a huge discovery, and the project itself was awarded the 1974 Nobel prize in physics, but despite doing the majority of the work, Bell was not a recipient of the prize (it went to her PhD supervisor instead). Undoubtedly one of the most influential astrophysicists of our time, Bell has only recently received appropriate recognition, and donates prize money to ‘fund women, under-represented ethnic minority and refugee students to become physics researchers.’ 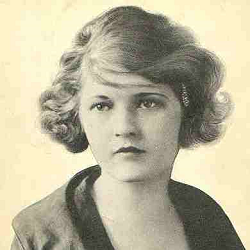 Nowadays she is mainly known as the wife of American writer F. Scott Fitzgerald, but Zelda was a fiercely independent and capable woman who sought her own career as a writer, then as a dancer and a painter. Her novel, Save Me the Waltz, is heavily autobiographical and considers her frustration at being branded an ingenue or 'princess in the tower', and can be read as a direct response to the female characters in her husband's novels. She was not content to live in the shadow of her husband, and sought to retain her own identity and independence of thought, even whilst battling severe mental health problems throughout her lifetime. 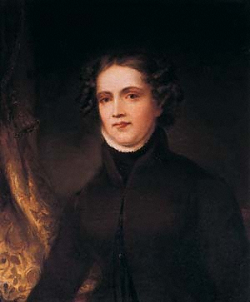 Anne Lister was an early 19th century Yorkshire gentlewoman who was fiercely independent, a shrewd businesswoman and keen traveller, but she is of particular interest to historians because of her surviving diary which details her homosexuality and relationships with other women. During the 18th and 19th century it was normal to assert that women did not feel any sexual desire at all, and deny that lesbians existed, but in her diaries Anne Lister shows no shame or confusion about her feelings, describing them explicitly as a pure form of love. I find Anne Lister's confidence and assuredness in her own desire, at a time when women's sexuality was so profoundly suppressed, inspiring and highly worthy of recognition this International Women's Day.

I chose Simone Veil, a brave and powerful French politician. She was a very active woman in French politics from the 1950s onwards. She fought for the right for abortion in France which was legalised in 1975 and was the first elected president of the European Parliament. She made lots of advances for fundamental rights for women. I think she inspires me a lot when it comes to be an activist in feminism; she also inspired me to try to remain informed in what is currently happening in politics because it can have real impacts on our daily lives as individuals and impacts hugely future generations.

Amal Clooney is my inspirational woman. She's a high profile human rights lawyer who's worked on extremely difficult cases. For instance, in 2015 she began work on the recognition of the Armenian genocide representing Armenia in the case against DoÄŸu Perinçek, whose 2007 conviction for genocide denial and racial discrimination was overturned in Perinçek v. Switzerland in 2013. She's also completely sassy as, prior to the above hearing, outside the European Court of Human Rights (ECHR) in Strasbourg, Amal was actually asked what designer frock she’d be wearing by a journalist. Her reply? “Ede & Ravenscroft” – the tailors who make her court robes. She also speaks out against important women's human rights issues, in 2016, Amal stood before the United Nations and told delegates she was “ashamed” to do so while they did nothing to help Yazidi women who had been attacked, abused and enslaved by Isis. Amal, who represents former trafficked sex slave Nadia Murad, delivered a powerful speech. 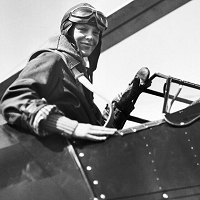 She was the first woman (and second person) to make a solo, non-stop transatlantic flight in 1932, landing outside Derry, Northern Ireland. 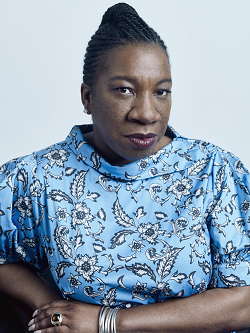 Tarana Burke was born in September 1973 in The Bronx, New York. In 2006, she founded the Me Too movement and began promoting the use of the phrase ‘Me Too’ to increase awareness of sexual assault and abuse. After the 2017 Harvey Weinstein accusations, the movement grew significantly, with #MeToo being used online. She was named, along with other female activists, Time Magazine’s Person of the Year in 2017. She received the 2018 Prize for Courage from The Ridenhour Prizes, an award for those who ‘persevere in acts of truth-telling that protect the public interest, promote social justice or illuminate a more just vision of society.’ She is currently Senior Director at Girls for Gender Equity. A woman of incredible perseverance in her dedication to supporting survivors of sexual assault, who continues to work tirelessly today. 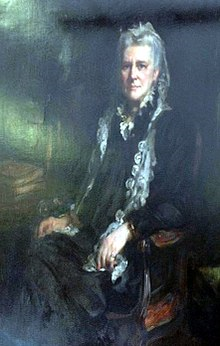 Dorinda Neligan was born in June 1833. She was an English headmistress at Croydon High School and a prominent suffragette. She served the Red Cross in France during the Franco-Prussian War in 1870, becoming a headmistress in 1874. There were 88 students at the school when she started, and only six years later the number rose to 230. In 1910, she joined a deputation led by Emmeline Pankhurst to petition the Prime Minister Asquith. Here she assaulted a policeman, but presumably escaped sentencing because of her age. She protested against her lack of representation by refusing to pay local taxes, engaging in a battle over a silver teapot officials seized from her instead of her payment. As a student at Croydon High, Dorinda Neligan is my inspirational woman because she set a precedent for the rest of the school in the years to come to challenge inequality by any means necessary.

She has gone through so much, yet still faces relentless media scrutiny, but has managed to pull through with incredible messages of self love and strength in her music. A true inspiration!

The way she teaches African history does not play lipservice to women or those who existed outside 'femininity'. She makes an obvious effort to not only discuss those who identified as women, but throughout her module 'Gods and Guns', not as just a seminar or a small section of history. Her work is inspiring to female students like myself who see women making history, and teaching it, as not something to be celebrated because of 'being women', but because of the contribution and work that one brings to the table. Her teaching of African history reflects the reality of life - women exist in all aspects of history, even if their voices might be hidden. 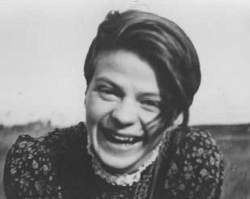 Sophia Magdalena Scholl (9 May 1921 – 22 February 1943) was a German student and anti-Nazi political activist.

She was convicted of high treason after having been found distributing anti-war leaflets at the University of Munich with her brother, Hans. As a result, she was murdered by the Nazi's being executed by guillotine.

Her last words were:

"How can we expect righteousness to prevail when there is hardly anyone willing to give himself up individually to a righteous cause? Such a fine, sunny day, and I have to go, but what does my death matter, if through us, thousands of people are awakened and stirred to action?"

She was and continues an inspiration all who strive against the far right and the politics of hate, and her words are just as relevant today as they were then. 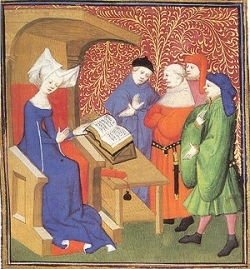 Christine de Pizan was an unusually well-educated woman writer in late C14th France who had to support her family after her beloved husband died suddenly. She did this by writing books for which her patrons gave her money; she is the earliest medieval author we know of to make a living by writing. She employed at least one woman illustrator for her very elegant manuscripts, which usually include an image of her writing at her desk, or presenting the book to a patron (often a royal woman). Her topics include love, classical mythology, contemporary politics and chivalry, but her most famous work is 'The City of Ladies', a powerful defence of women against centuries of misogynist criticism from male writers. Her last poem was a response to Joan of Arc's remarkable victories: 'Aha!! What honor for the female Sex! God shows how he loves it ...'