A Journey Through Time

A Journey through Time is an Imagine North East project coordinated by Phoenix Detached Youth Project in North Shields. The project started in January 2014 and completed in January 2015. A Journey through Time was designed as an intergenerational urban art project led by local people to look at the history of urban art in the area, how its culture has changed and how it has influenced social change. Originally the intention was for a group of local graffiti artists to work together as a team, using free-hand spray painting techniques to create a large art work depicting change in the area. Early on in the project, the artists rejected this model, which they felt did not embody the spirit and practice of graffiti art. Instead, they proposed to create an art work that represented the different influences and practices of the three generations of local graffiti artists involved: 1) the older artists who had been the pioneers during the 1980s; 2) the younger teenagers who currently work directly with Phoenix; and 3) the intermediate generation. This resulted in three separate artworks, each done by a ‘generation’ of local graffiti artists, but taken together they offer an overview of the development of graffiti art locally over three decades. The process of creating the art work was individualistic – reflecting the individualistic character of graffiti art as a practice. The final art works are exhibited in Phoenix’s legal graffiti art space at the Parks Sports Centre in North Shields. 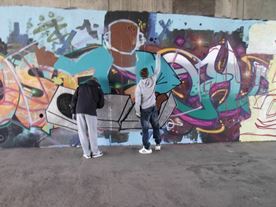