St James’ Centre for Heritage and Culture Partnership coordinated this project using the craft of felting to explore and imagine the local community in the past, present and future. The Benwell and Scotswood area has a long and interesting history. It has recently undergone major changes, and more changes are expected. The felting pictures built on residents' knowledge, experiences and hopes to depict this story.

Eighteen community groups of local people from different neighbourhoods and age groups created pictures showing what they think is important about this area – its past, present and future. Each felting group decided for itself what picture it wanted to create. The project provided a specialist felting tutor to show the groups how to do felting and help them to create their pictures. At the end of the project all the different felting pictures were brought together in a big exhibition.

The Launch of Benwell in Felt: St Jame’s Church Benwell, Newcastle upon Tyne

On Saturday 13th September 2014, the exhibition of Benwell in Felt was opened by Councillor Hazel Stephenson. The launch was well attended and involved a range of creative activities for the public alongside lunch, refreshments and the exhibition. An Imagine researcher spoke to some of the participants at the exhibition launch about the felting pictures. Points that emerged from these conversations included the use of bright colours, sunshine and rainbows that reflected hope and optimism; a curiosity about the particular places that were chosen as significant places in Benwell; and a fascination with the vivid imaginations of children and young people in depicting what they would like to see in their community.

Among those participating in the project were:

The images to the right show two groups of participants in the felting project from opposite ends of the age range.

The first is photo is of the St Margaret’s Toddler Group where parents and children made a felting picture with images of children and play – their theme being that children are the future of their area which is currently undergoing major regeneration. The church is one of the few facilities remaining in the area where people can meet and engage in activities, but it has been increasingly isolated by the process of large-scale clearance of housing, shops and other facilities over recent decades.

The second photo shows a group of older women who meet weekly in Benwell. They have been meeting together for many decades, originally as the “Bond Young Wives”. Although the church they were attached to has been closed for many years, they have continued to meet as a self-organised group with regular talks, social activities and mutual support. Their felting picture depicts the Bond Church which played such an important part in their earlier lives, and which was one of the many large churches built in Benwell in the late 19th/early 20th century for its growing population during a phase of rapid industrialisation and urbanisation. Historically churches were the focus of much of local social life. The other main basis of social life in the past was the labour movement: one of the other groups participating in the felting project is the Denton Burn Guild of Co-operators, who still meet weekly despite their dwindling numbers and increasing age. 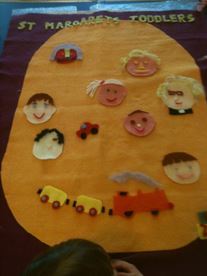 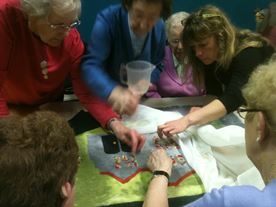