Diary of an Arab Cancer Production, by Abir Hamdar

In 2014, I published my first book: The Female Suffering Body: Female Physical Illness and Disability in Arabic Literature (Syracuse University Press, 2014). It explored how female illness was represented or, rather, not represented – marginalised and excluded – in modern Arabic literature. As a creative writer and playwright, though, I also wanted to do something more than simply analyse how other writers had represented these women: I wanted to tell their story myself. This led me to begin a new creative project: a play about contemporary Arab women’s experience of cancer based on real-life testimonies from, and interviews with, cancer patients. In 2017, this new play, called Wasafuli al-Sabr [Eng. Title: I Am Waiting For You] was staged in Beirut, Lebanon.

It was in the early summer of 2017 in Beirut that the renowned director Lina Abyad and myself sat down to discuss the logistics of staging the play. ‘No one will come for the auditions and no one will attend the play!’, she said. ‘Who wants to speak or hear about cancer? It’s too heavy a topic for the audience. They would rather go to the beach,’ the director added, ‘but we have to perform, no matter!’ What followed far surpassed anyone’s expectations.

We decided not to hold formal auditions. It didn’t seem like a good idea: ‘Come and audition for a play about cancer!’. Yet within a week we had assembled all the remarkable eight actresses/actor who would be working on the play. A cast of Iraqi, Syrian, Palestinian and Lebanese actors came together to defy the culture of taboo that marks Arab experiences of cancer. As readings began, it soon became clear that something fundamental bound the team together: several of the cast and technical support staff had a cancer story of their own. The renowned Iraqi actress Namaa’ al-Ward was a breast cancer survivor: ‘I want people to know that they can survive cancer! I want them to see me and know that I am here. That I made it.’ Others had either lost loved ones to cancer or witnessed the experience of close family members with cancer. As dancer/choreographer and actress May Ogden Smith put it: ‘This is a subject that is very close to my heart. It is important to me to be part of this project.’

Short Film: I Am Waiting For You

Cancer is taboo in Arab culture – it has been lived with (and died with) silently and invisibly for a very long time. And so it wasn’t possible to stage a play on women’s experiences of cancer without drawing attention to this ‘silence’ – the silence of prohibition, shame and, yes, death. So, every performance of I Am Waiting For You was preceded by a short film that featured the story of one Arab woman who had died of cancer without ever telling anyone – including even her own daughter. Instead, she spent her treatment locked up in her apartment and only went out after midnight huddled in a car while her husband drove her around her city. Told through a dialogue between the patient’s daughter and sister, the film paid tribute to this woman’s silent experience and at the same time acted as a subtext to the stories of those women heard on stage. As the audience came into the theatre hall and took their seats, they were thus invited to first encounter the stories of patients who were no longer with us.

As always with theatre rehearsals, we worked long hours: sometimes 12 or 14 hours a day from 10 am until 2 am. Sometimes things didn’t work out. Sometimes even the cast resisted their lines, and sometimes it was just too painful for members of the team to cope with the subject. But one thing was certain. Everyone had said the word ‘cancer’ so many times that somehow, along the way, it no longer evoked the usual terror. ‘If no one comes to see the play it wouldn’t matter’, said the director Lina Abyad at the end of one rehearsal, ‘At the end of the day the rehearsals have done something fundamental – normalized cancer for us as a team. It has become like any other word to me. I don’t fear it. If tomorrow I discover that I have cancer I’ll be able to tell others I have "cancer" not "that disease".’

Iraqi actress Namaa’ al-Ward sits regally in the centre of the stage. The audience slowly begin to come into the theatre hall chatting casually. They notice Namaa’ on stage, who stares defiantly at them. Spanish film director Paloma Yañez Serrano, who was in Beirut to produce a documentary on the performance, takes out a pair of scissors and begins to cut off Namaa’s long hair. There is dead silence. The audience is in shock. Paloma cuts the hair slowly, paying attention to every single strand. A male audience member obviously feels extremely uncomfortable at what is happening on stage. ‘What is this nonsense?’, he says angrily. A woman in the audience cries silently. Namaa’ continues to stare defiantly at the audience and at her image in a mirror. As Paloma completely removes Namaa’s hair with a final shave, Namaa’ stands up, looks at the audience with a charming smile and steps proudly off the stage. This act of rebellion against a culture in which most women wear a wig or a headscarf to hide their cancer treatment staggers the audience. It also marks the first instance that an Arab woman/actress shaves her hair on stage to pay tribute to female cancer patients.

There are two stages. One in the centre and one on the edges. One in which women sit in a waiting room and chat endlessly. Another where very few words are said - and those that are said are fictional and literary. And in this space on the edges, there is a woman who constantly moves. She moves her body beautifully, tragically, tiredly. She never tires of movement and yet has no voice. In May Ogden Smith’s dance sequences, we witness the telling, retelling, remembering and re-enacting of the stories of those female cancer patients who were not able to tell their side of the story and/or still do not wish to speak out.

We return to Iraqi actress Namaa’ al-Ward. She is walking around the stage as she retells the story of an Iraqi woman who, like her, had breast cancer: Namaa’ suddenly pulls up her top and displays her scarred breast. She points to where the incisions where made, how the breast was patched and how the illusion of a nipple was constructed. ‘Look how beautiful it is. Better than the old one!’ she declares. The audience are again staggered. This is the first time an Arab woman bares her breast cancer scars on stage.

Theatre for a Cause

Our work and its mission were not possible without the participation and support of cancer organizations, NGO’s and cancer support groups. From the Lebanese Breast Cancer Foundation to SANAD Hospice Care and the Barbara Nasser Association, the performances and the Q&As were an opportunity for the audience to meet and engage in dialogue with members of these different groups. On 28 July 2017 we also held a special performance for SAID Cancer NGO to help them raise funds for Colorectal Cancer Awareness.

Some audience members left moving notes. Some simply hugged members of the team and cried. Some stood up and talked about their cancer experience for the first time. Some challenged the oncologists and nurses present for the Q&As while others tried to bridge the gap between doctors and patients with recommendations and insights. In all this, something fundamental was happening: ‘The theatre space is turning into a support group for cancer patients, survivors, and families of cancer patients,’ said Lina one night, ‘I have never witnessed anything like this.’

We held an additional performance at the Lebanese American University Medical Centre-Rizk hospital. The hospital auditorium filled up with a crowd of men and women dressed in white coats: oncologists, nurses, medical interns and cancer patients from the hospital attend the performance and the Q&A. This is no ordinary event for the play’s team and the staff at the hospital: it is the first time Arab adult theatre has ever been performed at a hospital. As we begin the Q&As, oncologist Hady Ghanem tells us: ‘I had no idea this is how patients felt. I had no idea this is what patients discussed in the waiting room before they came to see us.’

Reviews of the Play

Wasafuli al Sabr [I Am Waiting For You] received extensive media coverage and reviews on television, radio and the press. It also triggered discussions and debates on social media. In the review in the leading Francophone newspaper L’Orient Le Jour, the play was described as follows: ‘De-demonizes Arab women’s cancer … The piece participates in a profound humanitarian mission: to clarify, to console and to calm … An excellent work of theatre of information, of transparency and of therapy.’ 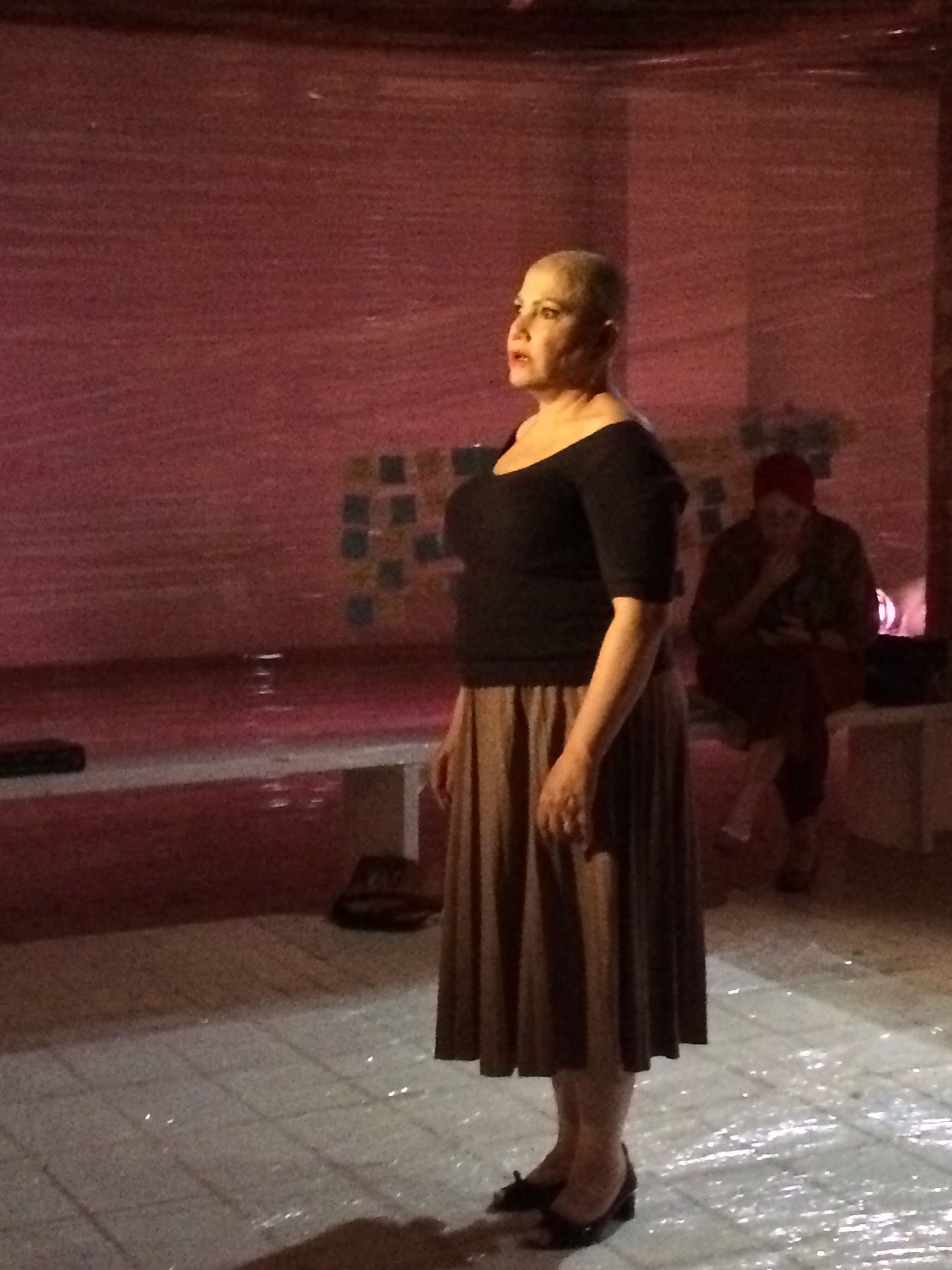 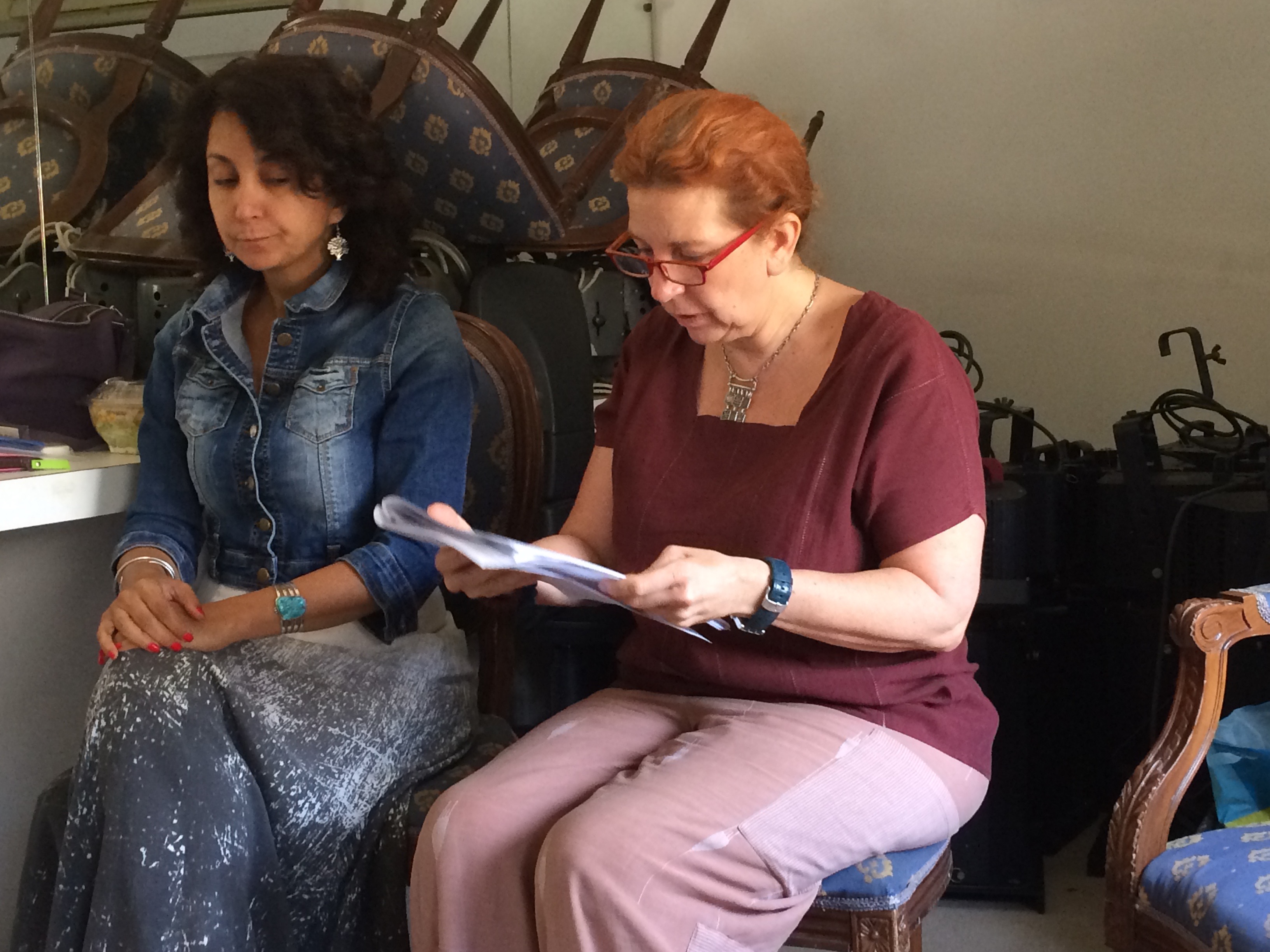 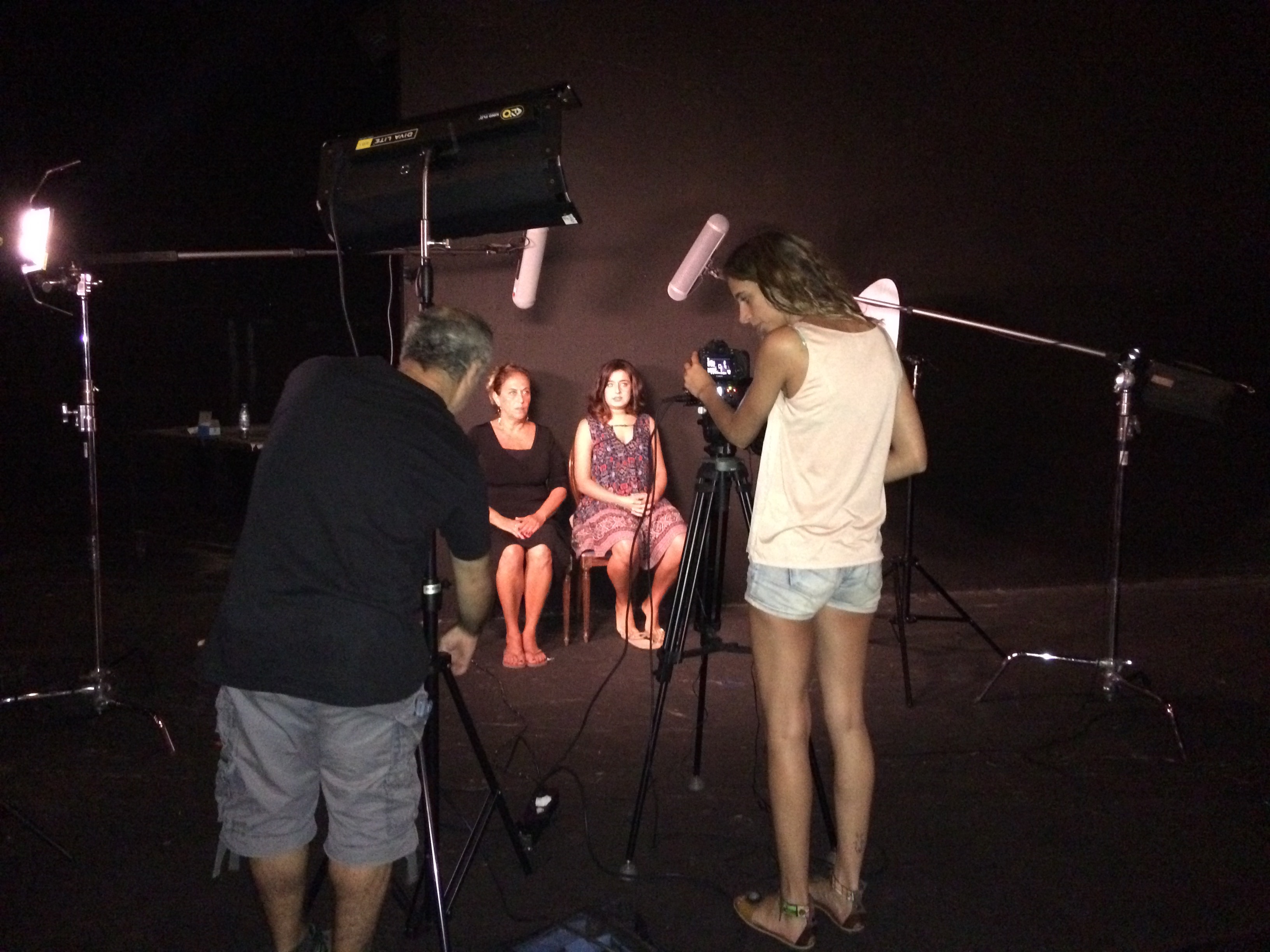 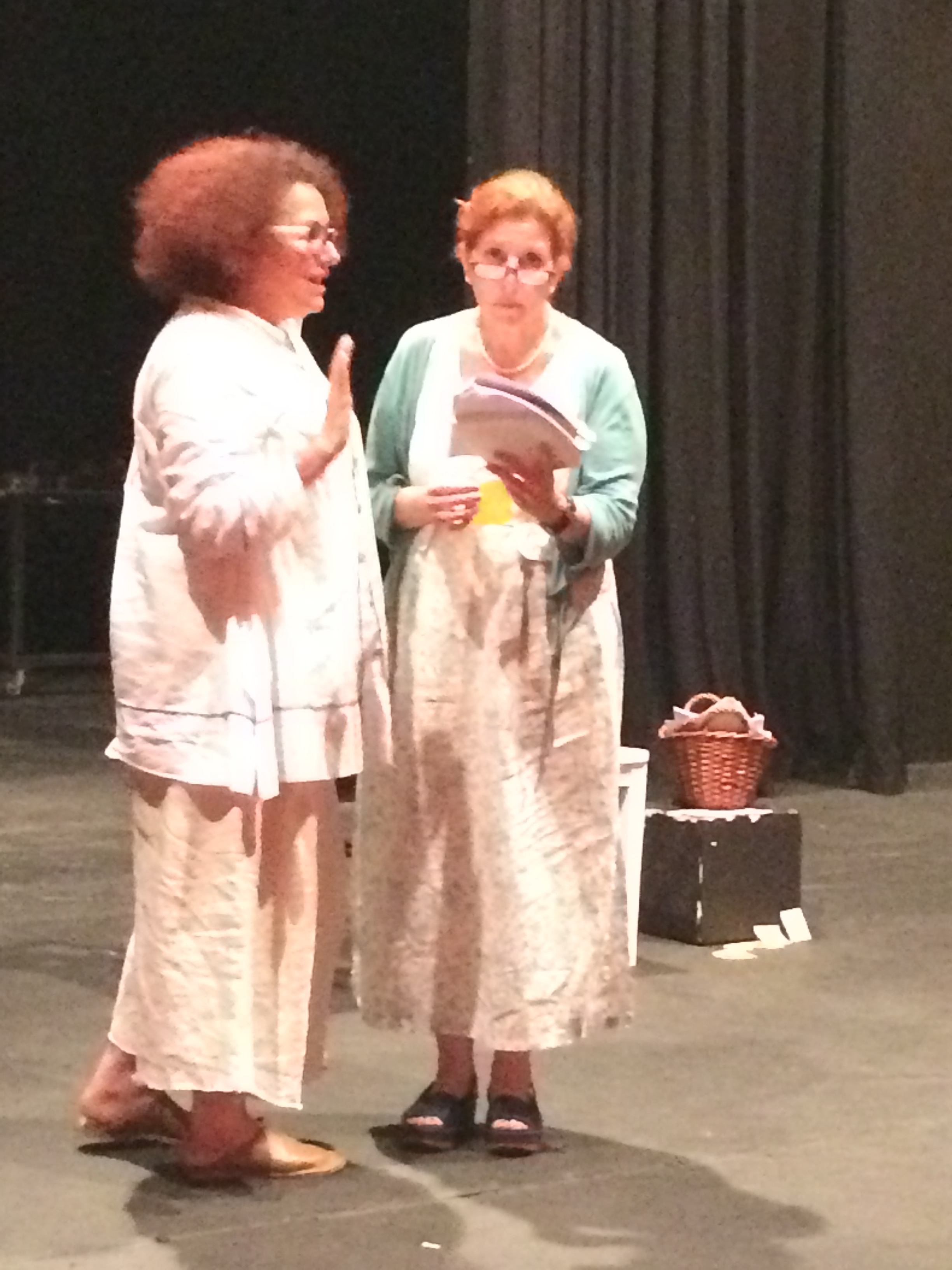 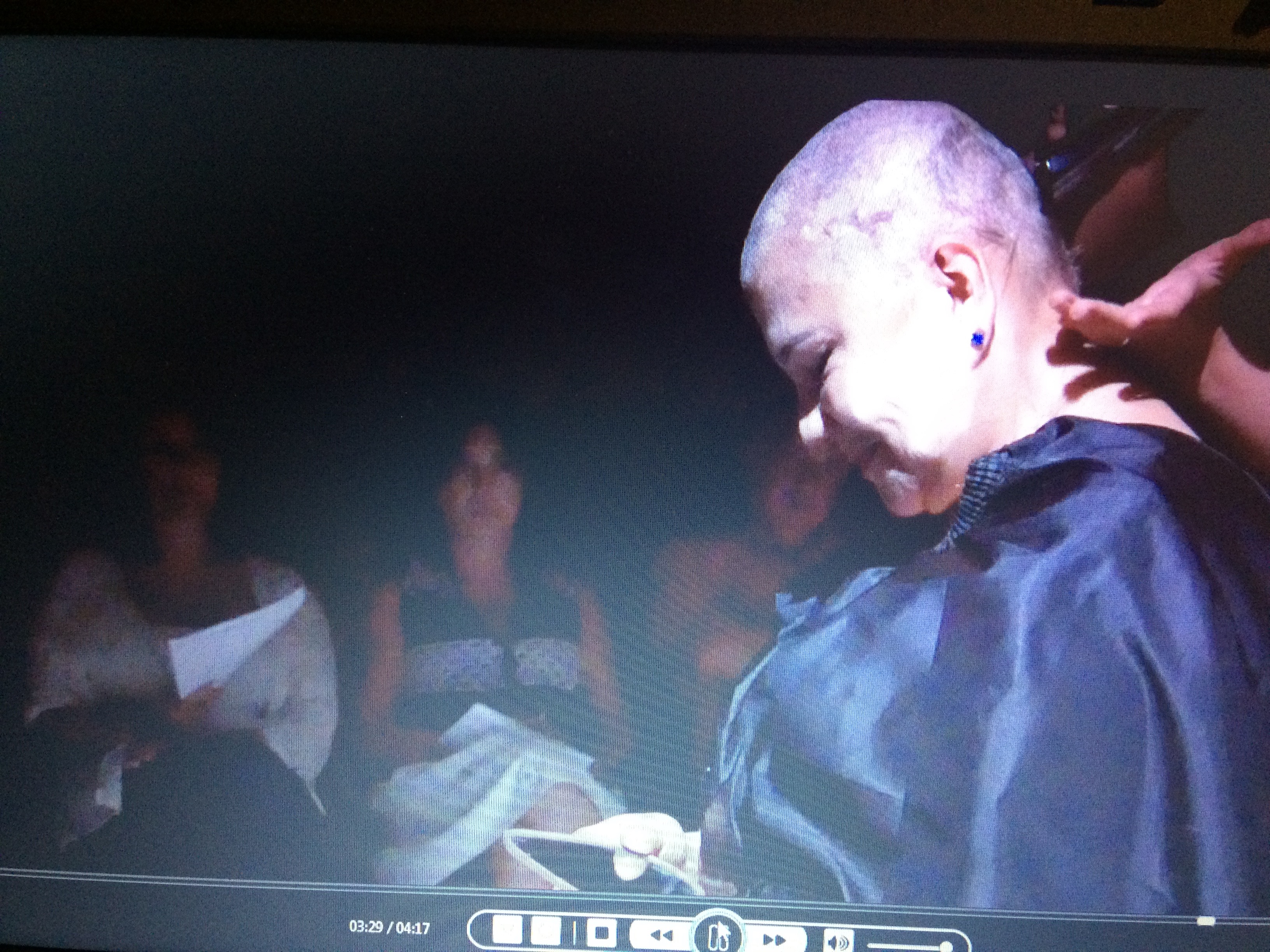 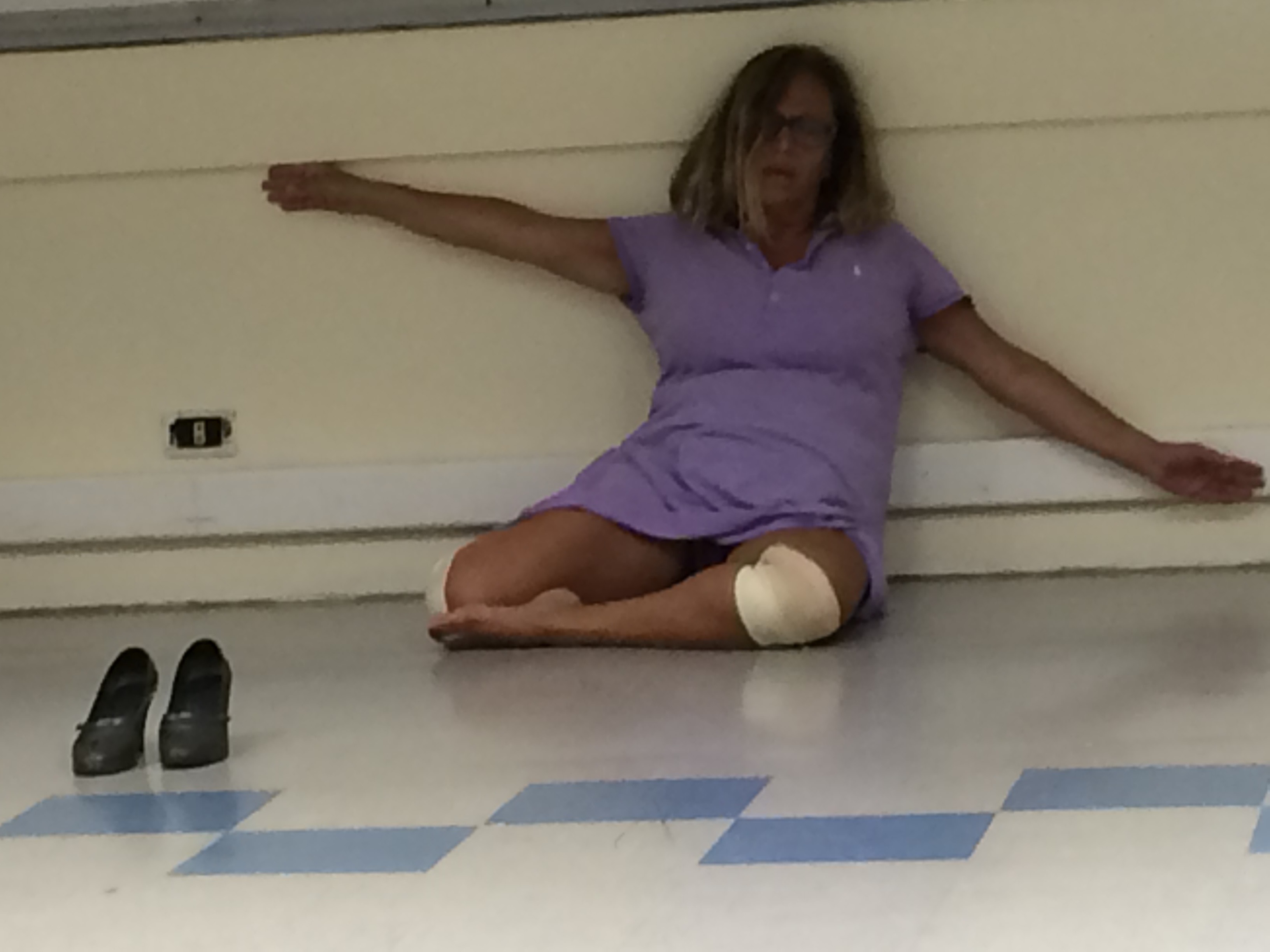 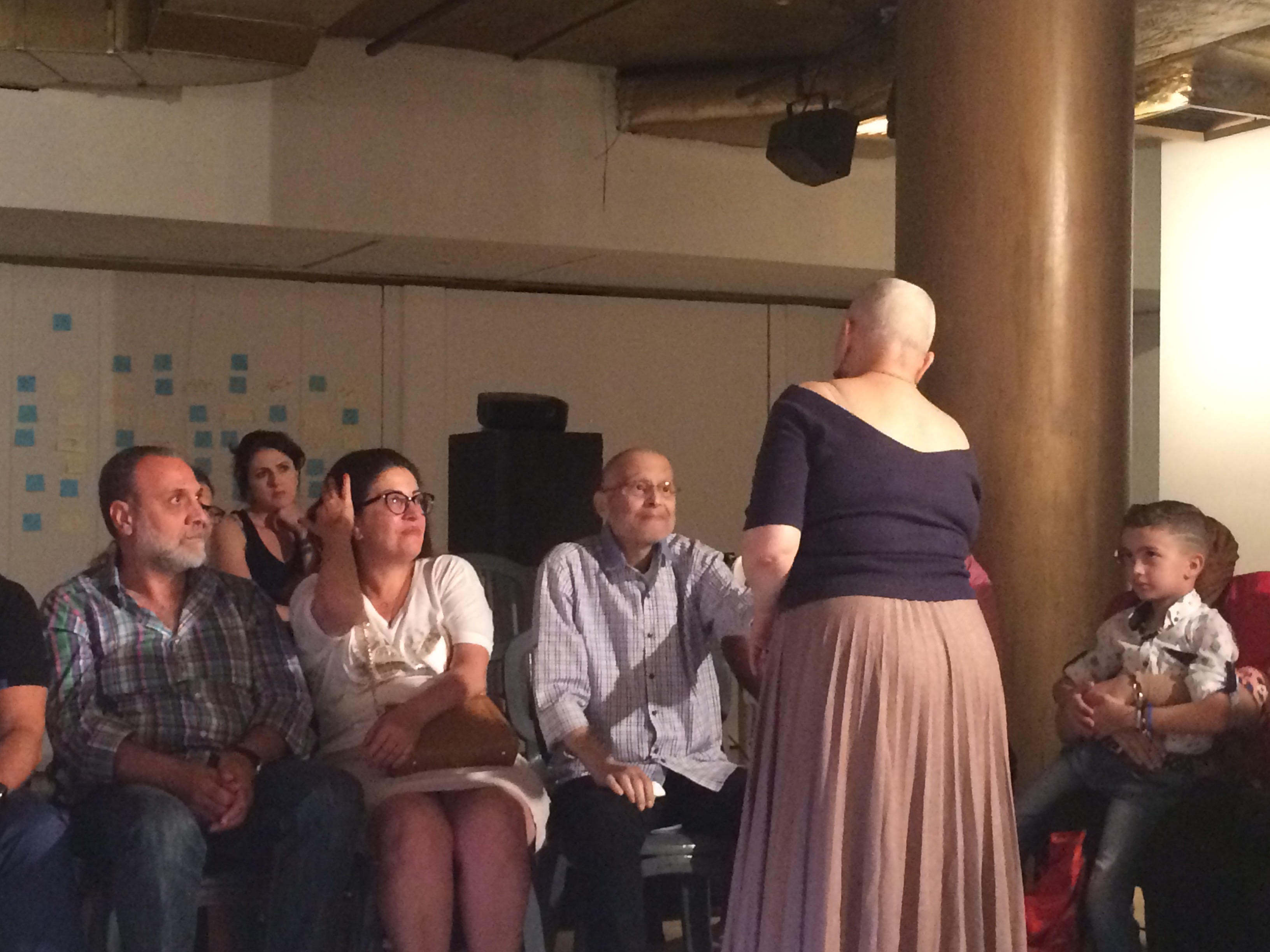 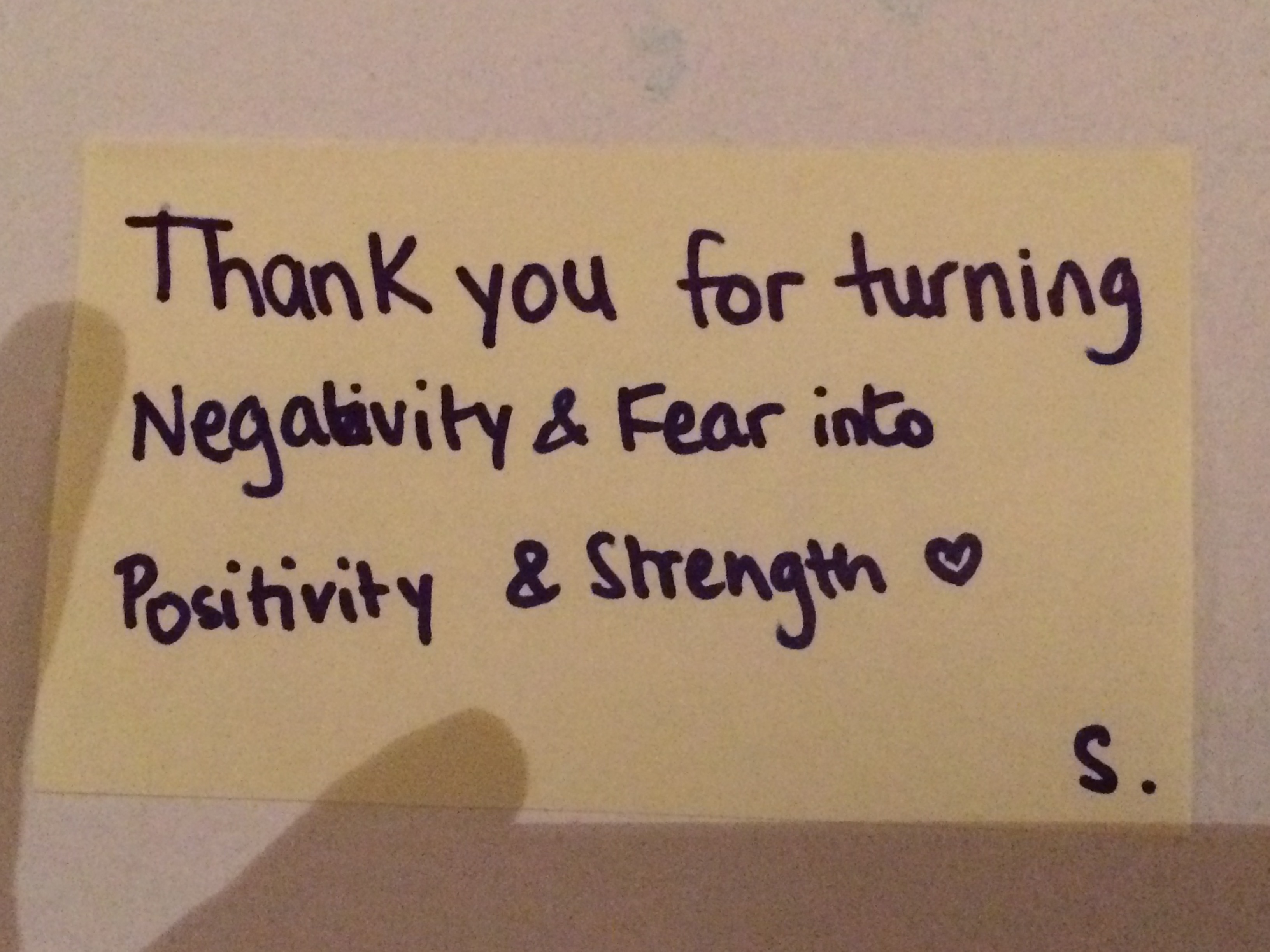 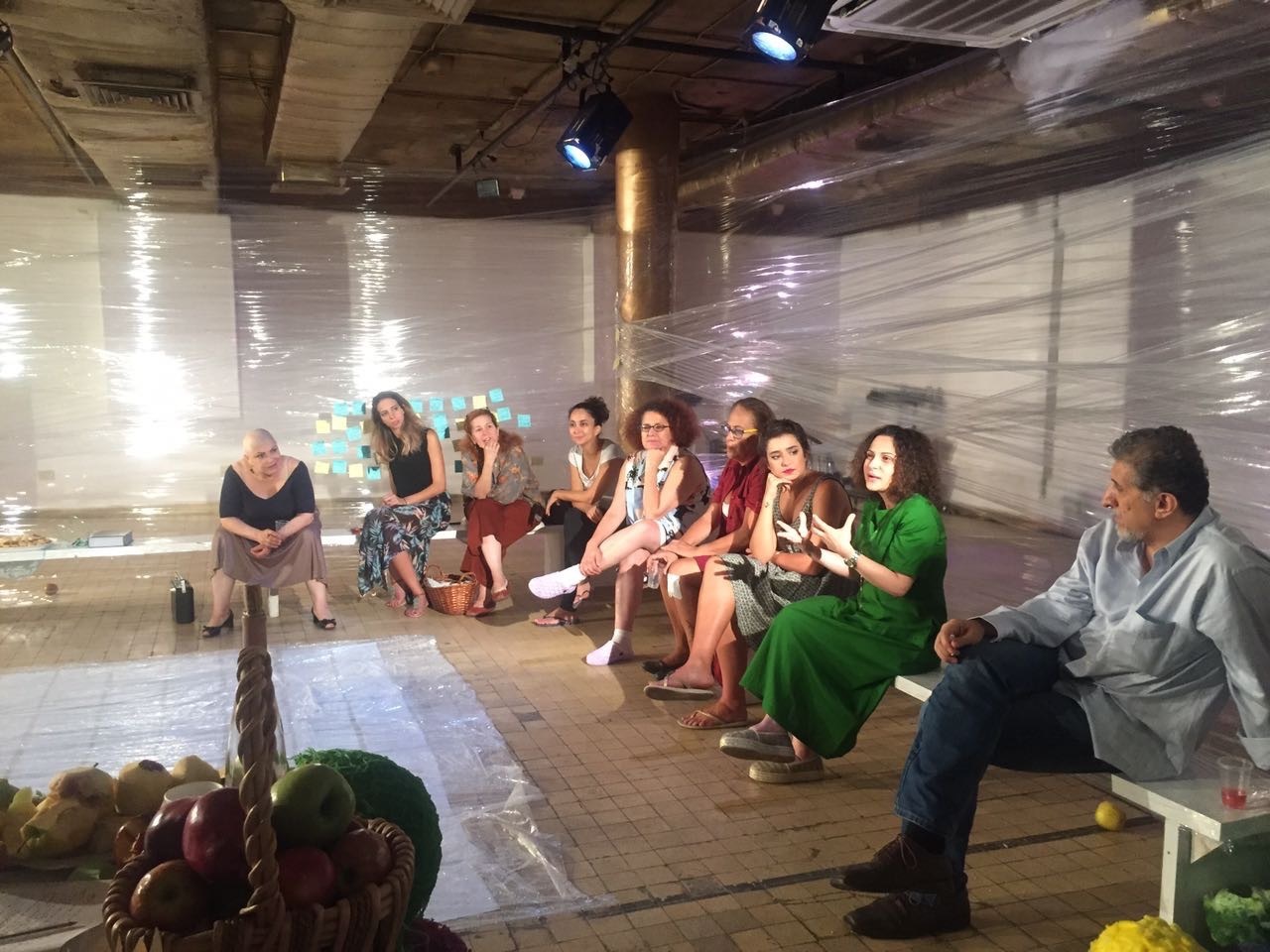 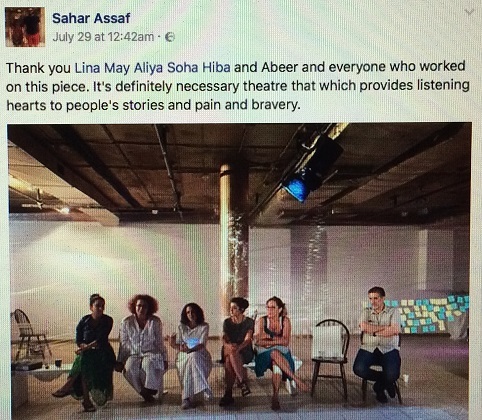 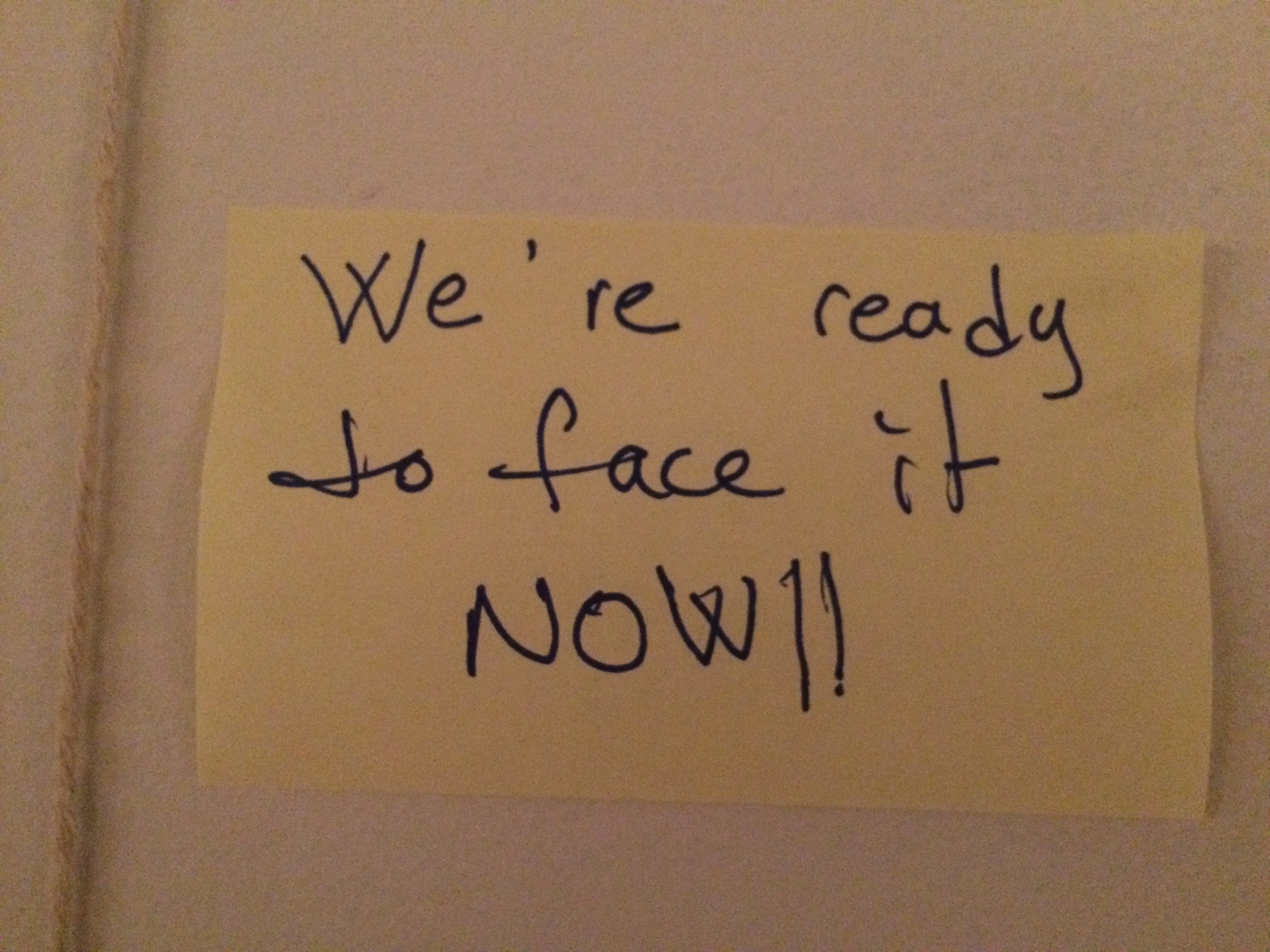