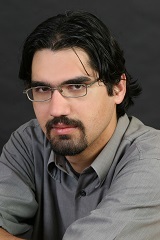 COFUND Research Fellow in the Department of Music

Dr Georgios (George) Athanasopoulos is a COFUND Junior Research Fellow working on a research project entitled “The fundamentals of emotional responses to music: Cross-cultural comparison of variations caused by harmonic elements of music using self-reports and psychophysiology.” The aim of the project is to investigate the emotional impact of specific cues of music (in this case harmonic context) on self-reported levels of affect, empathy and psychophysiology.

George was awarded a PhD in cognitive ethnomusicology from the University of Edinburgh in 2013, fully funded by an Alexander S. Onassis scholarship. His thesis empirically examined the visual representation of music in cross-cultural perspective, specifically focusing on the relationship between auditory stimuli and free-drawn representations of sound. Between the years 2015-2018 he was a post-doctoral research associate at the Aristotle University of Thessaloniki, working on various research projects involving traditional Greek musicians under the supervision of Prof. Emilios Cambouropoulos and Dr. George Kitsios.

He has conducted fieldwork research in Great Britain, Greece, Japan and Papua New Guinea, while his work has been funded by the Great Britain Sasakawa Foundation, the University of Edinburgh, the Aristotle University of Thessaloniki (State Scholarships Foundation & the Co-Invent project) and most recently from COFUND/Marie Curie Action. His research has been published in Psychology of Music, Musicae Scientiae, Empirical Musicology Review, and Song and Popular Culture, among others.