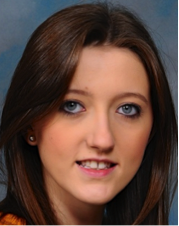 Member of the Department of Music

Maddie Kavanagh Clarke holds an MA, Distinction (2015), from Durham University and a first class honours Bachelor of Music Degree from University College Dublin (UCD, 2013). She is currently working towards a PhD at the Department of Music in Durham, where her research is funded by an Arts and Humanities Research Council (AHRC) Northern Bridge Doctoral Training Partnership Scholarship.

Previous awards include a Faculty of Arts and Humanities Masters Scholarship (Durham) in 2014 to fund her MA research, and in 2011 she was the recipient of a UCD stage-two scholarship, which recognised exceptional academic achievement for her undergraduate studies. In September 2015 she was presented with a ‘Faculty of Arts and Humanities Celebrating Success’ certificate, in recognition of her ‘outstanding academic record’. In 2013 she was awarded joint first prize at the 7th Annual CHMHE (Council of Heads of Music in Higher Education) Undergraduate Musicology Competition in Ireland for her undergraduate dissertation entitled ‘Syntax and Form in Mendelssohn’s Symphonic Sonata Forms: A Case Study of Symphony No. 3 and Symphony No. 4’.

Maddie’s research focuses on the analysis of early nineteenth-century music, with special interest in theories of form, particularly sonata form, Mendelssohn, musical syntax, and cadences. Her doctoral research seeks to contribute to nineteenth-century formal theory by exploring Mendelssohn’s treatment of thematic syntax and formal design. She is particularly interested in the expression of formal articulation, and cadences. Further to this, she is interested in the application of theory outside the canon, and the exploration of models appropriate for both Mendelssohn and his canonical and non-canonical contemporaries.

At Durham, Maddie tutors the first-year Analysis 1, and the second-year Theory and Analysis modules. Maddie is an invited guest lecturer on the second-year analysis course at Newcastle University, having also lectured on this course last academic year (2016-2017). In the 2016-2017 academic year, Maddie lectured the Analysis 1 course at Durham during the Michaelmas term, having previously been a tutor on this module (2015-2016), and she also tutored the second-year analysis course. Before moving to Durham, Maddie tutored the second-year undergraduate ‘theory and analysis of tonality’ classes at UCD (2013), and was a tutor to the UCD Philharmonic Choir during her undergraduate studies (2010-2013).

Maddie is currently organising the Society for Music Analysis TAGS Conference (Theory and Analysis Graduate Students), due to be held in the spring of 2018. Between September 2015 and September 2017, Maddie was the Department of Music’s Senior Postgraduate Representative, with responsibilities for organising the Department’s Guest Lecture Series, and the Postgraduate Research Seminars, and for representing the postgraduate community on a wide range of committees. She is currently the third-year PhD representative on the postgraduate student and staff consultative committee.

In addition to her academic career, Maddie is an operatically trained singer. She has performed, as a soloist, at a variety of venues (including the National Concert Hall, Dublin, The Mill Theatre, Dublin, and The Pavilion Theatre, Dublin), and has been a member of numerous choirs and music ensembles. She has been a prize-winner at a number of vocal competitions and festivals, and has received several scholarships for vocal training. She was the cantor in Dun Laoghaire Church (Dublin) for several years, and returns regularly to cantor the holiday celebrations.