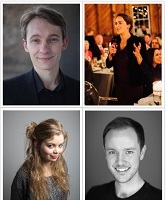 On 4 March 2017 Durham musicologist Dr Katherine Hambridge will be introducing visitors to the Bowes Museum to the music of Napoleon’s reign. Together with pianist Mark Austin and singers Oskar McCarthy and Héloïse Werner, Dr Hambridge will ask what the art-form meant for Napoleon and those living under his rule, exploring how music served to project—or undercut—the allure of the Napoleonic regime: from the elegance of the salons and the sumptuous spectacle of the opera, to the relentless, irreverent satire of the boulevard theatres and the enthusiasm and violence of popular song. The concert is at 3.30pm in the gallery. Admission is free with museum entrance.

The exhibition itself, The Allure of Napoleon, is curated by Durham historian Dr Tom Stammers and Dr Véronique Gerard-Powell, former Chief Curator and senior lecturer at the Sorbonne in Paris, and runs until 19 March 2017. It employs the museum’s own marvellous collection of objects relating to Napoleon Bonaparte and the age he defined—all testifying to the allure of the man John Bowes dubbed “that old vagabond”. Through these objects, the exhibition traces the changing faces of Napoleon and his restless search for fame.