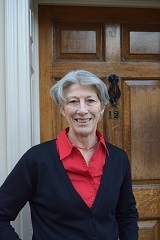 Elizabeth Archibald has been Professor of English Studies at Durham since 2012. Before that she held posts at King's College, Cambridge; the University of Victoria (Canada); and Bristol University. She specializes in medieval romance and the classical tradition in the Middle Ages, with a particular interest in the Arthurian legend. She is co-editor of the journal Arthurian Literature, and a past President of the British Branch of the International Arthurian Society. Her current research project is an interdisciplinary study of bathing in medieval literature and society.

She has published monographs on Apollonius of Tyre: Medieval and Renaissance Variations (1991), and Incest and the Medieval Imagination (2001), and has co-edited A Companion to Malory with A.S.G. Edwards (1996), and The Cambridge Companion to the Arthurian Legend co-edited with Ad Putter (2009). Her many essays and chapters range over classical and medieval themes and texts, including Chaucer, Malory, Scottish literature, and bathing.

She teaches a range of medieval literature in both Middle English and French, and currently supervises a number of PhD students working on later medieval literary topics, particularly romance writing. She welcomes enquiries from postgraduate applicants in these areas.