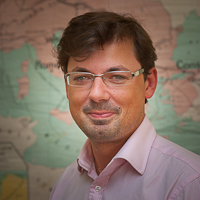 Member in the Institute of Medieval and Early Modern Studies
Telephone: +44 (0) 191 33 46570
Professor (High Medieval History) in the Department of History