Departmental Rep (Chemistry) in the Institute of Medieval and Early Modern Studies
Professor in the Department of Chemistry
Telephone: +44 (0) 191 33 42023
Room number: CG013
Professor in the Centre for Molecular and Nanoscale Electronics

My research interests lie in the fields of photochemistry and photophysics. This work encompasses a wide range of related topics, including the determination of fundamental photophysical parameters, the identification of intermediate species and their kinetic behaviour and the characterisation of a reactions end-products. It is only by having a detailed understanding of all these factors that we can design chemical systems in which we have control over the direction and outcome of photochemical reactions. This comprehensive approach is applied to the study of a number of photo-induced reactions, such as energy transfer, electron transfer and isomerisation. These processes are studied in a range of chemical systems including commercially important materials, e.g. electroluminescent materials, molecular probes containing lanthanide ions, sunscreens, as well as those of more fundamental scientific interest.

The group is well equipped to carry out photophysical measurements. We routinely study samples in both solution and solid states, including homogeneous and inhomogeneous thin films. We can study samples in inert atmospheres and record data over a wide temperature range. In addition to conventional steady-state UV-vis-NIR absorption and fluorescence spectrometers we also have luminescence and Raman imaging microscopes, ns-laser flash photolysis, and fluorescence lifetime spectrometers. We always welcome enquiries from groups that would like to collaborate on any measurements.

Identifying the materials used in medieval illuminated manuscripts gives us an insight into the techniques and skills of the scribes and illuminators, as well as the sometimes complex trade routes of the times. The challenge is to be able to identify materials on a delicate sheet of parchment, typically a folio of a bound manuscript that does not open readily, without contact, sampling or causing any damage. Ideally the technique should give an unequivocal identification of pigments with high spatial resolution and selectivity: a challenge indeed! At Durham we use Raman spectroscopy combined with hyperspectral imaging and diffuse reflectance spectroscopy to achieve this. Are currently studying the pigments used in manuscripts produced in the British Isles and northern Europe between the 7th and 15th centuries. The example shown is from Libellus de Exordio atque Procursu istius, hoc est Dunelmensis, Ecclesie (The Little Book on the Origins and Progress of this Church, that is of Durham) written by Symeon ca. 1105, and resides normally at Durham, University Library, Cosin V.II.6. The spectrum below show the presence of lapis lazuli which came from what is now Afghanistan.

These highly luminescent compounds are currently the subject of intense attention as potential 'molecular wires and switches' and as emissive layers for organic LED's. In collaboration with colleagues at Durham we have been using optical spectroscopies to investigate the role of structure, particularly conformation, upon the emission and material properties of the compounds. We are particularly interested in the electronic structure and bond-order of the ground and excited states and the role of conformation upon these parameters.

In the near future it is expected that conventional displays, based upon cathode-ray tubes, will be replaced by new technologies utilising thin-film electroluminecent materials. Devices based upon organic materials rely upon the recombination of holes and electrons that are injected into the material producing excited states, known as excitons, which can be either triplet or singlet character. In conventional materials based upon conjugated polymers only the singlet state excitons can emit light, and triplet excitons, are effectively wasted energy. Our interest lies in the use of organometallic complexes that are capable of harvesting both singlet and triplet excitons to produce light output and includes both the synthesis of new materials and the study of their spectroscopic properties.

The Luminescence of Complexed Lanthanide(III) Ions

We are studying the fundamental photophysical properties of lanthanide ions, including the investigation of the pathways of energy transfer from organic chromophores to the metal ions. Although the properties of terbium and europium have been extensively studied the photophysical behaviour of many other luminescent lanthanide ions in solution have been somewhat neglected for various reasons. We are investigating systems based upon neodymium, ytterbium and erbium in various media and have observed interesting isotope and ligand effects. This work is technically challenging due to the fact that the emission is often very weak, short lived and in the near infra-red spectral region. 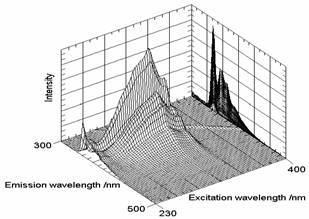 Excitation and emission matrix obtained from 1,4-bis(phenylethynyl)benzene in cyclohexane at 298K This spectrum shows that the emission spectrum is independent of the excitation wavelength, indicating that under these conditions the relaxation of excited state conformers occurs very rapidly.2