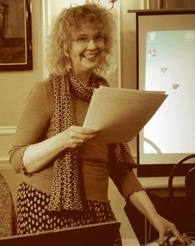 Corinne Saunders is Professor in the Department of English Studies. She specialises in medieval literature and the history of ideas, and has particular interests in romance writing and in medical humanities. Her current research is on mind, body and affect in medieval literature and thought. She is a Co-Investigator on the Wellcome Trust funded project Hearing the Voice and Collaborator on the Wellcome Trust project Life of Breath. She is Co-Director of the Durham University's Centre for Medical Humanities.

Her most recent monograph is Magic and the Supernatural in Medieval Romance (2010), for which she was awarded AHRC-funded additional leave and a Leverhulme Research Fellowship. She is the author of The Forest of Medieval Romance (1993), Rape and Ravishment in the Literature of Medieval England (2001), and over forty essays and articles on a wide range of literary and cultural topics. She has edited a Blackwell Critical Guide to Chaucer (2001); A Blackwell Companion to Romance: from Classical to Contemporary (2004); Cultural Encounters in Medieval Romance (2005); A Concise Companion to Chaucer (2006); and (with Françoise le Saux and Neil Thomas) Writing War: Medieval Literary Responses (2004); (with Jane Macnaughton), Madness and Creativity in Literature and Culture (2005); (with David Fuller) Pearl: a Modernised Version by Victor Watts (2005); (with Ulrika Maude and Jane Macnaughton), The Body and the Arts (2009); A Blackwell Companion to Medieval Poetry (2010); (with Jane Macnaughton and David Fuller) The Recovery of Beauty (2015); (with Frank Brandsma and Carolyne Larrington) Emotions in Medieval Arthurian Literature: Body, Mind, Voice (2015); and (with Jamie McKinstry) a special issue of postmedieval: A Journal of Medieval Cultural Studies, 'Medievalism and Medical Humanities'. She is the English editor of the international journal of medieval studies, Medium Ævum. She has co-organised three Public Lecture Series in the University, ‘Madness and Creativity: The Mind, Medicine and Literature’, ‘Flesh and Blood: The Body and the Arts’, and The Recovery of Beauty (all published by Palgrave Macmillan).

She teaches across the range of Old and Middle English language and literature, as well as History of the English Language, Old French, and some Renaissance topics, at both BA and MA level. She currently supervises a number of PhD students working on later medieval literary topics, particularly romance writing, and welcomes enquiries from postgraduate applicants in these areas.