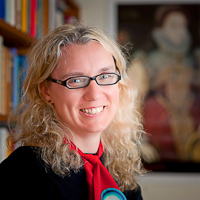 I am a primarily historian of Tudor and early-Stuart politics and religion, including the posthumous reputation of Elizabeth I. I also have an interest in the representation of the Tudors and Stuarts in modern media, especially opera.

My interest in the early modern period began when I did voluntary work in the archives of Hatfield House before I went to university. The home of the marquesses of Salisbury, it contains the Cecil Papers -- the papers of William Cecil, Lord Burghley (Principal Secretary and Lord Treasurer to Elizabeth I) and his son, Robert Cecil, earl of Salisbury (Principal Secretary to Elizabeth I and James VI and I, as well as Lord Treasurer to James) – probably the most important collection on early modern English politics in private hands. I loved working there so much that I went back every vacation during my undergraduate degree at Cambridge and used the archive for my undergraduate dissertation which was published, in shortened form, as 'Regnum Cecilianum? A Cecilian perspective of the court', in John Guy’s edited collection, The Reign of Elizabeth I: Court and Culture in the Last Decade (Cambridge, 1995). I went on to complete an M.Litt in Historical Research and a doctorate with John at the University of St Andrews. I taught at the universities of Cambridge, Manchester and Swansea, as well as working as a research assistant on the Clergymen of the Church of England Database, before coming to Durham in 2003. I am currently a Reader.

My initial interests were in high court politics, political culture, and the nature of Elizabeth’s queenship, all things that I investigated in my first book, Queenship and Political Discourse in the Elizabethan realms(Cambridge, 2005), and in a number of articles. From 2007, I was co-investigator, with Philip Williamson and Stephen Taylor (both Durham) on the AHRC-funded project, British state prayers, fasts and thanksgivings, 1540s to 1940s. This project explores over 800 occasions of special worship: prayers, liturgies, fasts and thanksgivings ordered by the crown or government, either to seek divine help during periods of crisis (such as plague, famine or war) or to thank God for his intervention. I was lead editor for the first of a three-volume edition, published by the Church of England Record Society in 2013: National Prayers: Special Worship since the Reformation. Volume 1: Special Prayers, Fasts and Thanksgivings in the British Isles, 1533-1688. I am currently co-editing, with Philip Williamson, the fourth and final volume; my focus is on the unofficial and official anniversary occasions, such as Accession Day and Fifth of November.

My new project is on the popular memory of Queen Elizabeth I, focusing particularly on provincial representations. It arises out of a longstanding interest in wall paintings, especially of historical events like the Spanish Armada, which led to my involvement in the conference at the House of Lords in 2008 on the Armada project (to complete the series of Burchett paintings of Lord Howard's Armada tapestries, lost in the fire of 1834). https://armada.parliament.uk/index.html

I retain an interest in the nature of political participation in England from the Break with Rome to the outbreak of the Civil Wars, particularly as manifested through ritual, performance and 'speech acts'. I am joint organiser, with Professor Krista Kesselring of Dalhouse University (Canada), of a workshop on the records of Star Chamber, to be held in Durham on 8th and 9th July 2019 (https://starchamber.ca/)

I am also interested in the relationship between history and opera, as a result of a series of workshops I conducted with successive groups of second year students, with the help of Ruth Paton and English Touring Opera, and which was funded by an Excellence in Teaching grant from the university.

I am privileged to be invited regularly to lecture and talk to new teachers through the Prince’s Teaching Institute. I developed the teacher/student pack of documents on The Reformation in collaboration with The National Archives: http://www.nationalarchives.gov.uk/education/resources/the-english-reformation-c1527-1590/

I welcome expressions of interest from graduate students wanting to work on Tudor and early Stuart court and popular politics, the nature of early modern governance, and religion, especially puritanism and special worship.