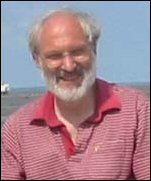 My research is based around applied wave field propagation and seismic data processing. In particular, the acquisition and processing of seismic reflection and refraction data and the development of software to investigate the propagation of seismic waves in three dimensional heterogeneous media. I am currently involved in a number of projects, described below.

Fast 3-D viscoelastic modelling: critical to improving methodology is understanding of how seismic waves interact with the heterogeneous geology. This project has been funded both by the NERC and DERA and has generated a fast and efficient full-waveform modelling scheme. The code can successfully handle 1, 2 or 3 dimensions with plane, cylindrical or point sources in a model that can contain any combination of material with acoustic, elastic or viscoelastic properties. The principal advantage over other codes, e.g. 3-D finite difference, is that the code can run on any workstation or fast PC and does not require the use of a parallel super computer.

Seismic Oceanography is a new discipline that brings the power and resolution of the seismic reflection method to bare on Oceanographic issues (EU funded NEST project - GO (Geophysical Oceanography) with a total value of 2.7M Euro). The project undertook joint acquisition and modelling to provide a benchmark calibration of the method in the Gulf of Cadiz where the hot saline water flows out of the Straits of Gibraltar and mixes with the North Atlantic Water. We successfully tracked a small Meddy (an underwater vortex of Mediterranean Water) and acquired high resolution images of its detailed temperature and salinity structure. This new tool has the potential to address issues on mixing in oceans and provide a means to monitor change. I was also involved in a CNR (Venice) led experiment to use seismic oceanography to monitor dense water currents along the western margin of the Adriatic Sea.

Volcanic Margins Research Consortium is a national research effort sponsored by industry focussed on continental margins that have experienced a major volcanic influence, eg the Faroes margin to the northwest of Britain. The extensive extrusive basalt flows and intrusive dykes and sill create problems for traditional mapping of these margins. The project combines traditional geological mapping and innovative remote sensing to help improve understanding of the evolution of these margins.

Bayesian methods provide the means to quantify uncertainty given some observed data and some prior information about the problem. I am developing techniques based on Bayesian principles, in conjunction with the Department of mathematical Sciences, to provide robust estimates of uncertainty for a range of geophysical problems: the computation of the velocity/depth model used in pre-stack depth migration; uncertainties in predicting over-pressure (GEOPOP3) and of seismic data; and joint uncertainties for combinations of complementary data such as gravity, seismic refraction and magnetotelluric data.

OSCAR is a NERC funded Consortium Grant (Durham, NOC, UCL and Oxford) that aims to map the heat and mass fluxes at a mid-ocean ridge. New ocean crust is formed at the mid-ocean ridge as the Earth's plates move. This crust is rapidly cooled by the hydrothermal circulation of sea-water through cracks and pores which removes the heat but also chemically reacts with the rock to deposit and remove minerals. The waste heat is then dissipated in the abyssal oceans. Recent modelling of ocean circulation has shown that including more accurate maps of this geothermal heat input has significant effects on the deep water circulation.

I am co-I on a forth-coming International Ocean Discovery Program (IODP) drilling expedition to recover core from south and south-west Australia, leg 369 Australia Cretaceous Climate and Tectonics. The project aims to understand the paleoceanography and tectonics of the Naturaliste Plateau (NP) and Mentelle Basin (MB) off SW Australia. Core and log data from a series of sites in water depths between 850 and 3900 m to investigate: (1) the rise and collapse of the Cretaceous hothouse; (2) the controls on oceanic anoxic events during major carbon cycle perturbations; (3) Cretaceous paleoceanography including deep and intermediate water circulation; (4) Cenozoic to recent paleoceanography including influence of the Tasman gateway opening and Indonesian gateway restriction; and (5) the tectonic, volcanic, and depositional history of the NP and MB prior to Gondwana breakup, as well as after separation from India and subsequently Antarctica.

Membership of Organisations and Societies

the Royal Society for the encouragement of Arts, Manufacturers & Commerce