Journey with us Across Time and Space

‘Religious and Spiritual Journeys’ are one of the fastest growing motivations for contemporary travel with an estimated 600 million journeys undertaken each year. More commonly termed ‘pilgrimage’, this is not a new phenomenon and there is a wealth of tangible and intangible heritage associated with such journeys throughout history and spread across the globe.

The motivations for pilgrimage are numerous and complex. Whilst pilgrimage is often viewed as a religious undertaking, many are educational and can be political. Pilgrimage can be personal and communal, as well as physical and spiritual, and the process of the journey holds as much significance as the intended destination.

Embracing different calendars, places, beliefs and traditions, there are many similarities between practices of pilgrimage. Pilgrimage centres and routes are often vibrant economic corridors, and can require significant management, administration as well as infrastructure.

Pilgrimage has continued resonance, not only in inspiring art, music, literature and contemporary culture, but in its recognition as a driver of economic growth and poverty alleviation, as well as its positive contribution towards personal wellbeing.

Join us ‘On Pilgrimage’, as we explore the traditions and wider context of ancient and modern pilgrimage through a series of events with speakers who will guide us on a journey through a landscape of individual objects, monuments, people and places.... 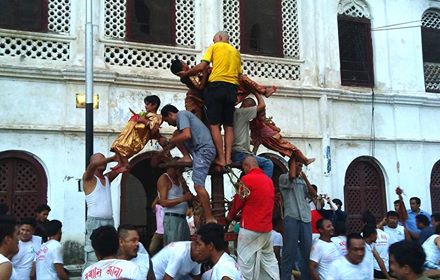 On Pilgrimage: The Trident Festival of Jayavageshwori at Pashupatinath

The temple complex devoted to Lord Shiva at the UNESCO World Heritage Site of Pashupatinath in Nepal’s Kathmandu Valley has a long and rich history. A living heritage site, it hosts more than fifty festivals annually, each of which is only completed only after venerating Lord Pashupatinath himself. The Trident Festival is one of those is celebrated in June. Medieval chronicles record that the festival was initiated with nine chariots to please the nine goddesses living around Pashupatinath but today only three of their chariots are carried out, among them that of the goddess Jayavageshwori, after whom the festival is now named. The origins of the festival can be linked to two different legends preserved in the locality. The first recalls that it was started to celebrate the day during which local people took revenge over the demons who attacked the population of Pashupatinath, while the second recounts the sacrifice of a boy to the Goddess Bhuvaneshwori by her priest, who was also the boy’s father.

On the day of Jayavageshwori Festival, a chariot is carried by residents through the streets from the temple of the Goddess Mangalagauri towards the temple of Bhuvaneshwori. There, it is joined by another chariot, which holds a boy of between six and seven years old, suspended on a spear. The two chariots are then followed through the streets by a funeral procession carrying a model of the sacrificed boy from Bhuvaneshwori, as the legend recalls that he was sacrificed on the same day. The entire procession then travels in convoy back to the Temple of Jayavageshwori, where it is met by a third chariot carrying one girl and two boys suspended on a trident and chanting profanities against demons. Following their journey around the town, the chariots and procession arrive at the Temple of Lord Pashupatinath, where they worship his victory over evil, before travelling to the bank of Bagmati River to wash away the demons’ influence. Residents believed that this festival, and its pilgrimage around the town, protects the area and its people from evil spirits.

Dr Sandhya Khanal (Parajuli) is Lecturer in Art and Iconography at Tribhuvan University’s Central Department of Nepalese History, Culture and Archaeology in Kathmandu. A committed fieldworker, she has worked extensively across the fields of heritage, ethnic identity and the tangible and intangible culture of Nepal since 2012.

The Trident Festival of Jayavageshwori at Pashupatinath in the Kathmandu Valley, Nepal © Dr Sandhya Khanal

Michaels, A. 2008. Siva in Trouble: Festivals and Rituals at the Pasupatinatha Temple of Deopatan. Oxford: Oxford University Press. 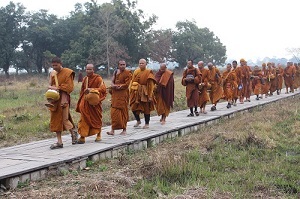