It is with regret that, due to the ongoing Covid-19 crisis, the full 2020 Durham Early Modern Conference has been postponed until 6-8 July 2021.

The global health crisis and lockdown requirements around the world have resulted in many people feeling isolated, not only from their personal, social contacts, but also from their professional networks. The Institute of Medieval and Early Modern Studies has therefore set up a series of online events related to this year’s Conference to ensure that as many research conversations as possible can continue to flourish during this time. All are welcome to join these online sessions, which are free of charge.

Click on the title of each event for further details.

Registration for the Conference Sessions has now closed.

Enlightenment (in a time of crisis): England/Scotland

This workshop is part of a series of online events arranged in lieu of the full Durham Early Modern Conference, which will return 6-8 July 2021

England and Switzerland in the European Enlightenment

Despite the historic positioning of the Church of England throughout the long Reformation as a via media between Geneva and Rome, one of the least studied aspects of the Enlightenment in England was the growing sympathy among lay and clerical English intellectuals for Swiss Protestantism as its varieties of Calvinism, especially in Geneva, facing the challenges of rational religion, Arianism, and Socinianism, became more liberal. Scholars have tended to focus largely on the Swiss connections of Edward Gibbon, who resided frequently in Lausanne. Beyond the European contexts for Gibbon, the ‘Helvetic trio’ of Jean-Alphonse Turretini, Samuel Werenfels, and Jean-Frederick Osterwald partook in the Enlightened Anglophilia that historians now associate with the likes of Voltaire and Montesquieu as they sought to reduce the doctrinal impositions of the Formula consensus ecclesiarum Helveticarum (1675). By way of return, Englishmen like Thomas Hollis and Francis Blackburne played a central role in the English translation and transmission of reformers such as Brian Herport in their campaigns for a more comprehensive and anti-Catholic Church of England. Most notoriously, Jean-Jacques Rousseau engaged with William Warburton’s The alliance between church and state (1736) in his notorious chapter ‘On civil religion’ in The social contract (1762), an engagement that was received by Anglophiles like Nicolas Bonneville during the French Revolution in De l’espirit des religions (1791). This paper explores the relationship between Enlightened Swiss and English intellectuals as they attempted to fashion forms of scientific inquiry and religious settlement congenial to this ‘enlightened age’. It also shows how, by situating the Enlightenment within the various European traditions of Christian reform, England might fully be situated within a European conception of the Enlightenment

Enlightenment and secularisation in England (1650s-1730s): the reception of French and Dutch ideas.

In this paper I examine the changes in English religious and intellectual culture occurring between the 17th and the early 18th centuries in light of the reception of early modern Dutch and French books and ideas. In particular, I argue that the diffusion in England of an historical/critical approach to the reading of Scripture “as a work of culture” and the development of a vision of the clergy that prioritized social cohesion and the primacy of ethics over theological speculations, were enabled by the engagement with the works authors such as Grotius, I. Vossius, Spinoza, and Richard Simon.

Heterodoxy and the ‘Scottish Enlightenment’

This paper argues that the agenda of ‘pluralising’ the Enlightenment, when taken to its logical conclusion, requires us to study the development of pluralism itself. This is particularly true in the case of Scotland. It is often suggested that, notwithstanding some cordial internal disagreements, the Scottish Enlightenment was a compact and coherent movement, progressive in its moral and economic thought, but conservative in its politics and religious commitments. This view has discouraged historians from searching for heterodoxy in early eighteenth-century Scotland. Yet the appearance of heterodoxy in various forms, and the increasing willingness of civil and ecclesiastical authorities to tolerate it, shaped the culture in which enlightened Scots worked. This paper reflects on one strand of heterodox discourse in Scotland, hitherto scarcely studied: deism and anti-deism.

About the Durham Early Modern Conference

The Durham Early Modern Conference is an annual conference organised by the Institute of Medieval and Early Modern Studies (IMEMS) at Durham University. It offers a broad and inclusive interdisciplinary forum for any aspect of early modern studies, covering the period c.1450 to c.1800.

In 2013 Durham’s Seventeenth-Century Studies group, which was originally founded in 1985, became an integral part of IMEMS, beginning a new role within one of Durham University’s flagship research institutes. Building on the success of the Durham Seventeenth Century Conference, in 2017 the decision was taken to re-launch this regular scholarly event with a more ambitious timeframe. The emphasis is deliberately multi- and inter-disciplinary, with papers displaying a full range of methodological approaches and spanning national and disciplinary boundaries. 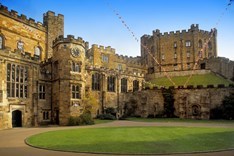