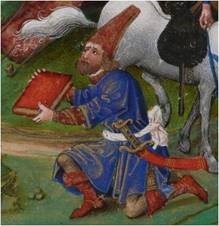 The lecture is followed by on optional drinks reception. Both are free to attend, but places are limited so booking is essential. You can book your place here.

Medieval literature is replete with episodes of crossdressing and disguise, where clothing may be used to protect, conceal, alter power dynamics or reframe identities. This is most often discussed in the context of medieval gender, yet cases where clothing is used to manipulate racial and/or religious identities may similarly expose processes of constructing both self and other, while also revealing the potential for crossings between communities. Somewhat in contrast to earlier accounts focusing on the Saracens of crusading realms, the fourteenth and fifteenth centuries were not only marked by an increase in contact and conflict with the Ottomans but also saw an increase in travel accounts and first-hand narratives of intercultural experiences, from Mandeville to Bertrandon de la Broquière and Ghillebert de Lannoy. Yet in this ever-expanding world, to what extent do crossings from and to an empire differ from those between Christian and Saracen communities? Why and how do people dress across races or religions? What can such acts tell us about changing understandings and practices of colonisation and conquest in this period?

This lecture will focus upon late medieval French and Burgundian tales and travel narratives and will set representations of racial/religious crossings and crossdressings in the context of an emergent Ottoman empire and dwindling hopes of reconquering the Holy Land.

Victoria Turner is Lecturer in French at the University of St Andrews. After completing her PhD and a teaching fellowship at the University of Warwick (2009-13), she was a Teaching Fellow at the University of Leeds (2013-14) before taking up her current post at St Andrews in 2014. Her research interests span medieval French and Occitan literature from the twelfth to fifteenth centuries. She is particularly interested in the representation of intercultural contact in medieval France, especially in concepts of race, otherness and identity and how these might intersect with questions of gender, religion and nation. Part of her research has thus also involved the use of theoretical approaches to literature, reflected in the focus of her first monograph Theorizing Medieval Race: Saracen Representations in Old French Literature, which is currently under contract with Legenda.